In what is definitely a hilarious moment, LeBron James was once again reminded that he is too old ready.

In a quick talk at the middle of the Houston Rockets-Los Angeles Lakers clash, the 19-year-old Jabari Smith Jr. connected with James. The rookie in Smith told the future hall of famer that his father faced him during his NBA debut back in 2003-04 season.

For reference, James, the ex-Cleveland Cavalier played his first NBA game against the Sacramento Kings back in Oct. 29, 2003. The Kings went on to outlast the Cavs, 106-92, but James didn’t fail to impress in front of the basketball nation with his 25 markers, nine assists, six boards and four steals in almost 43 minutes of play.

As such, Jabari Smith Sr. was a part of the said Sacramento lineup until the end of the season.

Though realizations of being old have temporarily stuck into his mind, James still delivered to everyone that father time can still be defeated, as the 38-year-old superstar churned 48 points, nine assists and eight boards to lead the Lakers over Rockets, 140-132. 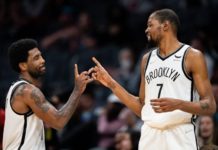 Step into the EuroLeague maze…

John Calipari will give VIP experience to coal miner and his family from viral...

Lakers guard Matt Ryan had a unique path to the NBA, and it involved...