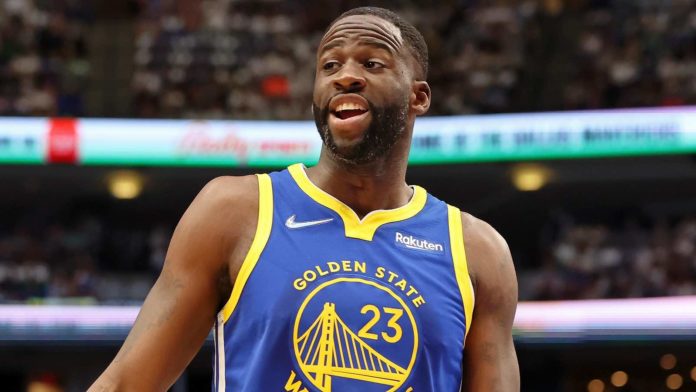 Two days ago journalist Taylor Rooks sat down with Warrior’s player Draymond Green for a podcast session and asked him if he could imagine a future outside of Golden State and boy, did this open up a great deal of emotions! The foward admitted that he considers his time at the team is certainly at an end.

Either it’s before this transfer deadline or during the next NBA free agency in July, Draymond Green is almost certain his future is beyond the Bay Area’s borders. One thing for sure is, the Warriors will have to make an important decision once he becomes an unrestricted free agent.

During the interview he described his feelings with a bleak ”the writing is on the wall”, and then adding that what he meant by this figure of speech, is that he knows the business and it’s pretty obvious he can’t be a Golden State player forever.

He then on went to say ”you would have to be an idiot” to believe the team owes him something just because of what he’s accomplished with them, as seen below in this twitter post:

“Quite frankly, the writing’s on the wall.”

Draymond Green on the possibility of not being a Warrior 👀

Nevertheless, Draymond was clear in stating he would love to be a Warrior’s player forever, but ”I understand the luxury tax. I understand you’ve got these young guys and contracts up, and they have to be paid. I understand all of those things. And so, just for me, that’s what I mean by the writing’s on the wall”, he said. “If you don’t get to know the business, then you can be blindsided and be, like, ‘Oh man, everything I’ve done, I’d thought I’d be there forever.”

The power foward is part of Golden State’s most historic team, the same that won four NBA titles in the past decade with Steph Curry and Klay Thompson at his side. The same squad that recorded a 73-9 in 2016’s regular season! Green’s run with the Warriors is no joke.

Two weeks ago, both Green and Thompson were involved in a hallucinating ‘ghost’ pass that left the internet bewildered, as you can see here in our article.

Golden State have very complicated business decisions on their horizon. Fitting Green into a roster that already costs $354 million in 2022 after luxury tax penalties will be very hard to handle, especially since it’s believed that Green will probably reject his $27.6 million opportunity to become an unrestricted free agent.

The Athletic’s website stated that the Warriors owner Joe Lacob is in no mood to keep spending these crazy fortunes just to keep building the team’s roster. “I did say that (a $400 million payroll is not possible), and it is, from a business perspective, an almost insane thing to even consider. But I think we’re gonna have to wait and see because the truth is winning matters,” he said. “(That kind of payroll) is not possible without losing quite a bit of money at the bottom line, let’s put it that way.”

Although Lacob mentioned it would be his absolute dream to have all of his Big 3 players retire with the team, he knows that after the 2023-24 season, Golden State also has a long line of historic teammates like Klay Thompson that need their contractos settled. Others to come are Jonathan Kuminga, James Wiseman and Moses Moody.

Steph Curry listed as ‘probable’ to play against Suns

Zach LaVine shares why Jrue Holiday is the most underrated player in the NBA...