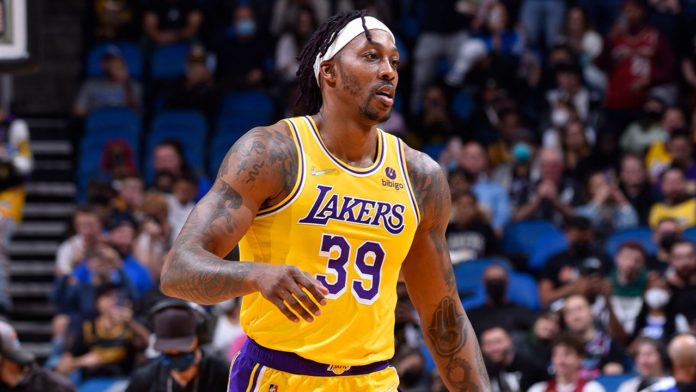 A possible future NBA Hall of Famer has an open invite to the WWE.

Triple H (aka Paul Levesque) said that he is ready for Dwight Howard to sign onto the company.

Dwight Howard has an open invite to join the WWE once he steps away from his NBA career.
(Gary Bassing/NBAE via Getty Images)

Howard made a name for himself when he was a double-double machine with the Orlando Magic, but after a successful open tryout in Nashville over the summer, WWE’s chief content officer wants him on board whenever he’s ready.

“When he says, ‘Hey, I want to give this a shot,’ he’s got my phone number. All he’s got to do is call me, and we’ll see what can happen,” he told Sporting News. “If he’s willing to put in the grind and drive that guys like Logan Paul and Bad Bunny and Tyson Fury are willing to put in, then let’s go.”

Paul “Triple H” Levesque says there is an open invitation for the NBA’s Dwight Howard to join the WWE.
(Frederick M. Brown/Getty Images)

Howard is still an NBA free agent, having played for the Los Angeles Lakers last year — it was his third stint with the team. But whenever he decides to call it a career in basketball, he wants his WWE journey to be a totally different chapter that differentiates himself from his prior career.

“I’m not coming into this thing as ‘I’m Dwight Howard, the basketball player,'” Howard said back in July. “This is a whole new ball game for me. I want to be. I want to learn from all these guys and be the best wrestler I can be if it leads down to this path. Where I am wrestling and just enjoy it. I mean, you only get one life, you know?”

The 53-year-old former wrestler said that the “ball’s in [Howard’s] court.”

Dwight Howard, as a member of the Orlando Magic, argues a call during a game against the Miami Heat on Dec. 21, 2011, in Orlando, Florida.
(Mike Ehrmann/Getty Images)

Howard certainly has the body type of a WWE superstar. He stands at 6-foot-10 and weighs 265 pounds of lean muscle.

Vladimir Lucic: “The chemistry we had was extraordinary”

Clippers News: How do the Clippers’ NBA 2K23 ratings look?