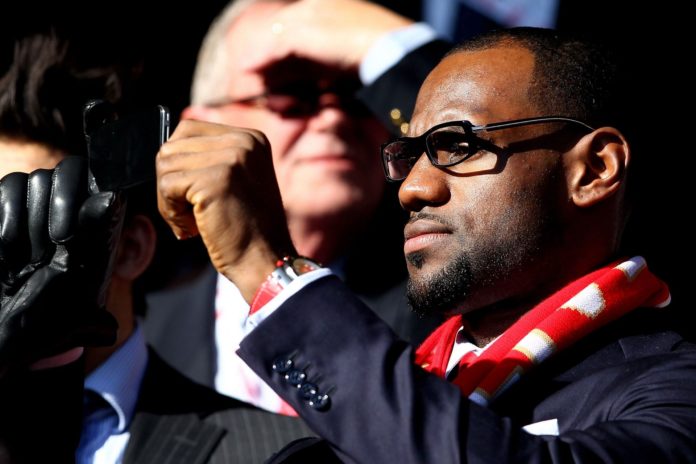 LeBron James was once a VIP guest of FIFA in the 2014 World Cup final in Brazil. James, who was fresh off losing the NBA Finals that year and returning home to Cleveland, called the World Cup a bigger sporting spectacle.

In an interview with the Associated Press, James explained why he thinks the World Cup is bigger than the NBA Finals.

“This is the highest you can get,” James said Saturday. “This is bigger than the NBA Finals in the sense that it’s the world, and you have so many countries here.”

“I’ve been watching it from home in the States and it’s been an unbelievable tournament.”

To read the entire article by the Associated Press, click here.

LeBron James was with then-teammate Anderson Varejao, who is from Brazil. “The King” was also asked to pick the winner of the World Cup final between Germany and Argentina, but went with the safe answer.

“I’m not sure,” James said. “I think Germany is the better overall team, but Argentina has one of the best players in the world, maybe the best, (Lionel) Messi. So that’s why we play the game and we’ll see what happens. I hope it’s a great one.”

It was indeed a great game between Germany and Argentina. The two sides went toe-to-toe for 90 minutes without scoring a goal. The game went to extra time, with Mario Gotze scoring the winner in the 113th minute for Germany.

Messi had the chance to score the equalizer late in extra time from a free kick within goal-scoring distance. However, his shot flew across the bar as the Germans lifted the World Cup trophy for the fourth time in history.

LeBron James is a minority owner of Liverpool FC

LeBron James bought a stake in Liverpool FC back in 2011 for around $6.5 million. James bought the shares from Fenway Sports Group, which acquired the football club in 2010 for $480 million.

The LA Lakers superstar owns around 2.0% of the football club, which has been put up for sale recently. James and FSG also have a unique deal in place, including marketing deals and royalties.

Maverick Carter, who is James’ business partner, had this to say about their relationship with FSG back in 2021:

“Working with Fenway Sports Group for the past decade has taught LeBron and me so much about the business on a global scale, and we’ve always believed it would lead to something bigger.”

James also exchanged the 2.0% stake in Liverpool for a 1.0% stake in FSG. With FSG being linked to a potential NBA expansion team, it’s understandable why James wants to be part of it.

The four-time champ has been vocal about his desire to become an owner, specifically for a team in Las Vegas. If FSG ends up acquiring an NBA franchise, there’s no better face for ownership than James.

Stephen A. Smith Tells The Lakers To Trade LeBron James: “They Might Actually Start...