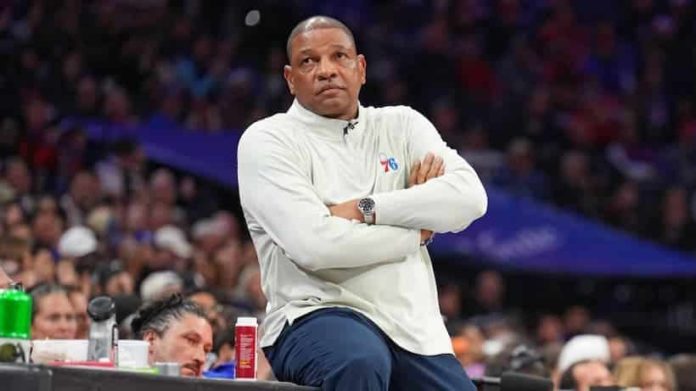 In their narrow 113-112 win vs the LA Lakers last night, the Philadelphia 76ers are healthy once again and head coach Doc Rivers had his full compliment of players to use. Rivers made a slight tweak to the starting lineup last night as Tyrese Maxey came off the bench for De’Anthony Melton. The long-time head coach revealed after the game that the Sixers will be using three different starting lineups moving forward.

A change might have been made as the Sixers have been having some defensive struggles this season. Melton got the start over Maxey as defense is his specialty as he’s second in the NBA with (1.9) steals per game this season. With 76ers guards having nagging injuries all season, Melton has played in 40 games and has made 31 starts.

Pennsylvania Sports Betting sites have the 76ers at (+1600) to win the Finals this season.

After the teams 113-112 win vs the Lakers last night, Doc Rivers had this to say to the media after the game about Philly’s plans with the starting lineup’s moving forward.

“We told our team that’s three lineups that we’ll be using for this point on,”… “We were going to do it in the Utah game, but Tobias was out, but they know the lineups, I’m not going to share them, but there’s three different lineups we’ll use on different nights.” – Doc Rivers

Even with the start over Tyrese Maxey last night, De’Anthony Melton still played less minutes and was not as effective. Three different starting lineups means that the Sixers are trying to experiment with some things, and Melton was just one example of that.

He also explained how some night’s they will have to use lineups to try and match up with other teams, while they’ll also try and do the opposite by using more effective lineups against teams with glaring weaknesses. Rivers said he wants to see maturity from his players as they use these new lineups. Forcing normal starters to come off the bench is not an easy task and the Sixers will try and work through those challenges together.

Tyler Herro on his extension with Heat: “I’m not motivated by my incentives”

‘I Would Trade Anyone In The NBA For 15-Year-Old LeBron James’: Utah Jazz President...