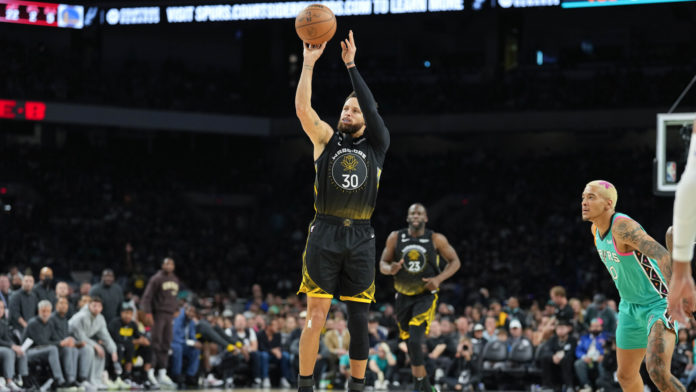 The Golden State Warriors are having a tumultuous 2022-23 NBA season and it doesn’t seem like they’re making a big improvement in recent days. Even though they welcomed back Stephen Curry and Andre Iguodala recently, the Dubs keep struggling to win games.

Right now, they are right at the .500 mark, ranking 6th in the Western Conference standings. After winning the 2022 NBA championship, they were expected to continue their good level, but things haven’t gone that way for them. Some think they need to make a trade, and it seems like Stephen Curry is one of them.

The superstar point guard has never spoken about what he wants his team to do, as he leaves that to the front office, but this season might be different considering the Warriors’ current level.

According to one NBA executive, the Chef might be trying to get his team to make a trade ahead of the 2023 deadline since he’s not getting any younger and perhaps he’ll get tired of waiting for James Wiseman to become a top talent in the NBA. Talking with Sean Deveney of Heavy, the executive said:

“Steph lets it be known, and he has let it be known that he is going to be 35 [in March], and he does not have time to wait for James Wiseman to make trips to the G League,” a Western Conference executive told Deveney. “He also is not of the mindset that they won a championship last year, and they should be satisfied with that – he will be pissed, frankly, if they do nothing and they lose in the play-in or something.”

The Warriors have some questions to answer soon. Draymond Green already claimed that he might be living his last days with the team, and he might not be the only one to exit this squad soon. They had to let go of several players from their championship squad, and the Warriors appear to be ready to repeat that in the near future.

Perhaps a trade is what they need to improve their level and not leave Curry in a LeBron James-type situation, where he has to do a lot for his team in his late 30s.

Tyrell Terry, former Mavericks draft pick, retires from basketball at 22 due to anxiety...

NBA analyst blasts Russell Westbrook for not joining the huddle during the game, suggests...

The major investments which have helped Kevin Durant’s net worth soar compared to his...