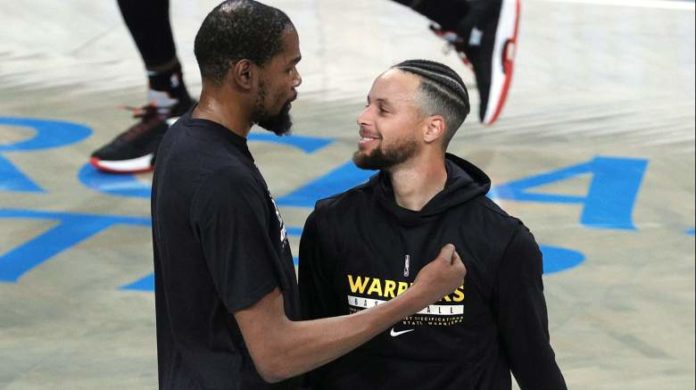 Kevin Durant of the Brooklyn Nets talks with Stephen Curry of the Golden State Warriors.

Dominance. If there is any word to define the duo of Kevin Durant and Steph Curry during their three seasons as teammates on the Golden State Warriors, that is the one that sums it up perfectly.

Per Basketball Reference, during Curry and Durant’s three seasons as teammates in Golden State, the Warriors had a regular season record of 182-64. That record increased exponentially in the playoffs, where they were 67-14, including their 2017 run where they went a blistering 16-1 en route to the title.

This past season the Warriors climbed back to the mountaintop after a two-year hiatus from the NBA playoffs, defeating a very game Boston Celtics team in the NBA Finals. But this time, the road to the title was significantly more difficult without the services of Durant.

Curry sat down with Sports Illustrated’s Ashley Nicole Moss and played a game of “This or That” when he was asked to describe the value of his four championship rings. Moss asked the Warriors star if his most recent championship means the most to him and he answered with a resounding yes.

The Sports Illustrated host then asked the Warriors star to choose between his two championship wins with teammate Kevin Durant, or if he’d select his current one. His answer?

“No, I want this one,” Curry said affirmatively. “No, give me this one, all day every day.”

The latest Nets news straight to your inbox! Join the Heavy on Nets newsletter here!

For those who may be tardy to the party, Durant requested a trade from the Nets on June 30. After a standoff that lasted nearly the entire summer, Durant rescinded his trade request as he and the Nets agreed to move forward with their partnership. But During the trade talks, reporter Marcus Thompson II of “The Athletic” said that KD and his former teammates in Golden State had preliminary discussions about getting the band back together.

“The Warriors superstars have been in conversations with Durant. In addition to catching up, the Hall of Fame-bound peers did entertain the idea of a reunion,” Thompson writes.

“It was mostly about the stunning nature of it even being possible. The idea of them playing together again had to seem impossible when Durant left in free agency in 2019. It isn’t lost on them how life has contrived an opportunity for them to come full circle. They see it, like everyone else, and talked about it, like everyone else.”

Now that Curry and the Warriors have won their first title in the post-Durant era, the pressure has shifted towards the Nets star to deliver his new franchise its first title. That pressure will surmount even more with the looming return of 3-time NBA All-Star Ben Simmons.

Durant is probably in the best situation he has been to compete for a title since he left the Bay. Outside of Brooklyn’s big three of Durant, Simmons, and Kyrie Irving, they have a wealth of legitimate role players such as Seth Curry and Joe Harris, who make Brooklyn’s squad even more dangerous.

But the name of the game for the Nets this season is execution. They have all the tools in place to compete for a title, now it is just a matter of getting it done.

Analysis: All-Star reserve voting will lead to some snubbing

Jason Kidd on Facundo Campazzo: “The way he plays [fast] is something that we...