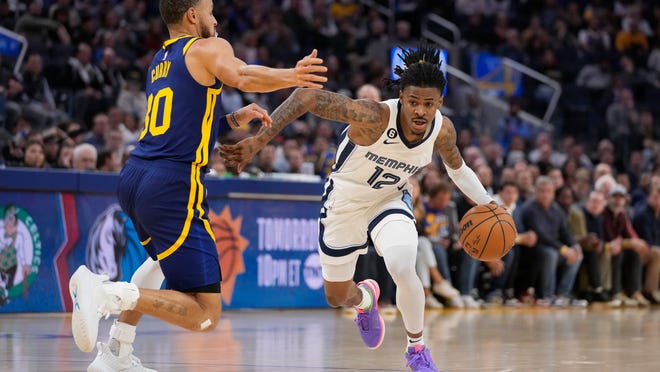 Stephen Curry didn’t see the end of the Golden State Warriors‘ 122-120 win over the Memphis Grizzlies Wednesday, as the All-Star guard was ejected with 1:14 left in the fourth quarter at Chase Center.

Curry threw his mouthpiece after being upset with teammate Jordan Poole for not passing him the ball and rushing a 3-point shot after an offensive rebound. The mouthpiece went into the crowd and the referee nearby quickly issued a technical foul and tossed Curry out of the game.

In the pool report after the game, crew chief Sean Wright confirmed that Curry’s mouthpiece was thrown “into the stands with force”, which is an automatic ejection.

It’s the second time that Curry has been ejected from the game. During Game 6 of the 2016 NBA Finals, he also tossed his mouthpiece in frustration but hit a fan in Cleveland.

Curry, who finished with 34 points, told reporters Wednesday that he let his emotions get the best of him but he didn’t think he threw his mouthpiece into the stands. He hoped to avoid a similar situation from seven years ago but still paid the same price.

“The way that our season has gone, there’s questions about the heightened sense of urgency of every detail matters,” Curry said. “When you want something really bad, like getting a win, fourth quarter execution, clutch time type situation, all that stuff does matter. So I reacted in a way that obviously put myself out of the game, put the team in a tough place.

The Warriors (24-24) defeated the Grizzlies on a last-second layup by Poole after overcoming a 10-point deficit in the fourth quarter. Poole told ESPN that he although he didn’t see what happened, he disagreed with the ejection.

“No reason he should be thrown out in the last minutes of the game. He’s one of the greatest players of all time,” Poole said.

When Poole saw Curry in the tunnel after the game, he playfully threw his mouthpiece at him before hugging Curry.

The Warriors have beaten the Grizzlies (31-17) twice in as many meetings this season. After an 11-game winning streak, which tied a franchise record, the Grizzlies are on their first four-game losing streak since Feb. 2-8, 2021.