Millionaire rapper Drake is no stranger to the NBA and its fans. He is regularly seen courtside watching some of the biggest matches of the season and he is also the official ambassador of the Toronto Raptors. Moreover, his association with Golden State Warriors superstar Stephen Curry is also quite well known.

The two were once seen trash-talking each other during a game. Furthermore, it often seems they are also quite close friends. Drake has referenced Steph Curry in his songs, especially in his hit song “0 to 100/The Catch Up”.

It seems Curry loved the shoutout as he and Ayesha released a spoof of the song in their own version. The couple shot a video in their kitchen with the song playing in the background. Interestingly enough, the two were literally cooking in a pot similar to Drake’s lyrics. Riley, Steph’s daughter also made a brief cameo in the 48 seconds long video.

Drake once got Stephen Curry in trouble

Everyone knows about how passionate and eccentric Drake is courtside whenever he is supporting his native team, the Toronto Raptors. While some love his attitude and nature, some hate the $250 million worth rapper for his antics.

Moreover, he has been fined on multiple occasions for his antics on the courtside. Back in 2021, he was fined by the Golden State Warriors coach Steve Kerr while also punishing Stephen Curry and Draymond Green.

Steph and Draymond happened to be late for the team flight and apparently, Drake was the reason behind them being late. Steve Kerr made sure he doesn’t bend the team rules over for anybody. Not only did he punish Steph and Draymond, but he also fined Drake as well. The rapper had to pay a $500 fine similar to that of Curry and Draymond.

What is your favorite memory of Stephen Curry and Drake on the court? Let us know in the comments down below. 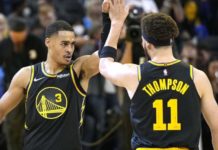 “I Am Not a Perfect Person”: Michael Jordan Once Echoed Charles Barkley’s Sentiments About...

Jazz CEO: “We have a plan in place to help us assemble the championship...