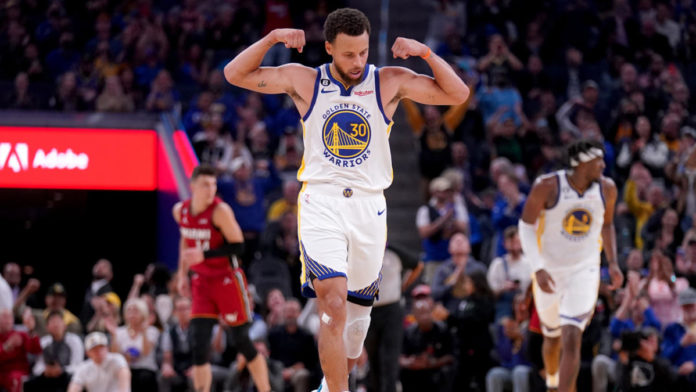 SAN FRANCISCO – Upon hearing Thursday morning that the latest valuation of the Warriors was set at $7 billion, tops in the NBA for the first time in franchise history, Andre Iguodala could not resist a snide but very trenchant remark.

“Steph got a piece of that?” Iguodala asked. “I would hope so.”

Ten hours after Iguodala’s comment, Curry went out and delivered another in the long list of demonstrations to support that belief.

The Warriors were leading the Miami Heat by four, 103-99, when Curry entered with 6:59 remaining. When he walked off the floor after the final buzzer, they were 123-110 winners.

Curry put the game on ice by scoring 10 points in a little more than three minutes, during which span Golden State’s lead grew from five to 11. With only two minutes left to recover, the Heat were done.

“Steph was just sublime,” coach Steve Kerr said. “What he’s doing is incredible. He just gets by anybody. It doesn’t matter who’s on him, he gets right into the teeth of the defense and finishes or finds guys. He’s been spectacular to start the year.”

Curry played a season-high 37 minutes, scoring a game-high 33 points, shooting 13-of-22 from the field, including 7-of-14 from beyond the arc. He added nine assists and seven rebounds.

Those numbers are all the more impressive considering Curry spent significant portions of the game trying to set up Klay Thompson in hopes of shaking his longtime sidekick out of his early-season angst. Results were mixed, but Thompson finished with a season-high 19 points.

Curry, as usual, supercharged his performance with several highlights, none more mesmerizing than when he spent a few seconds toying with Miami guard Tyler Herro before faking him into the Bay and draining a 3-ball to give the Warriors a 108-100 lead with 5:32 remaining.

“It’s just what he does,” said Andrew Wiggins, describing Curry as “one of the GOATs.

“He almost fell,” Draymond Green said of Herro. “It was a great move. (Curry) got to the spot that he wanted and once he got Tyler to open his back leg, he was kind of dead at that point.”

The shot dropping through the net brought Curry’s teammates off the bench and the sellout crowd out its seats and into momentary state of delirium.

For Curry, the play drew a cellular reaction from personal trainer Brandon Payne.

“It’s stuff you work on in the summer,” Curry said. “My trainer already texted me and called out the pattern. It’s reps that you do all summer long that just comes out based on reads. Just make a play.”

Curry through five games this season is averaging 30.8 points per game while shooting 48.6 percent from the field, including 45.8 percent from distance.

Only four times has a player opened the season with five games in which he scored at least 30 points, with seven 3-pointers, on two occasions. Kemba Walker did it as a member of the Hornets in 2018. The other three times, with this being the latest, belong to Curry.

“Steph is incredible,” Green said. “He’s playing great to start this year off, which is expected. As I’ve said before, he continues to improve, which is scary that that guy continues to get better.”

Curry has spent 13 years making a compelling case for being the Warriors’ most valuable asset, on the floor and off. Won two MVP awards, one with the only unanimous vote in NBA history. The Warriors, with him as their centerpiece, have won four championships and built a new arena in a city with a history of being particularly stringent on such undertakings.

Meanwhile, the value of a Warriors franchise bought for $450 million in 2010 has, according to Forbes, grown more than 15-fold in 12 years.

I asked Curry if he had heard Iguodala’s comments, which were made after the team’s morning shootaround.

Fact is, the Warriors can pay Curry no more than the collective bargaining agreement allows. This season, it’s $48.1 million. It jumps to $51.9 million before soaring to $59.6 million in 2025-26, the final year of his contract.

So, Curry is getting “a piece of that” which the Warriors are worth. And, still, as Iguodala implied, it’s not commensurate to his worth.

Shaq Claps Back at Kanye West By Offering Him Some Advice

LOOK: Gilbert Arenas responds on the backlash he received from his personal take about...