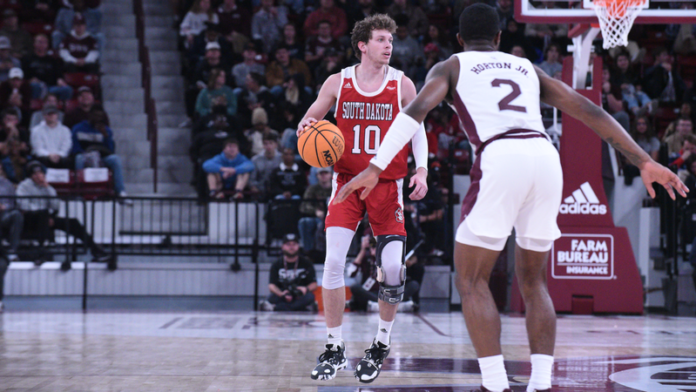 
The Game
South Dakota opens the Fort Myers Tip-Off with a mid-day match against LIU. Tip-off is scheduled for 2:30 p.m. (ET) from Suncoast Credit Union Arena in Fort Myers.

The game will be live streamed on the host college’s website at fswbucs.com. Fans can tune into the game on the Coyote Sports Network with John Thayer on KVHT 106.3 FM in Yankton/Vermillion or by using The Varsity Network app.

The Series
Tuesday’s game will be the first time these two teams have met.

The Coyotes
South Dakota returns to the MTE experience after not participating in one last season. Last year’s absence was the first time the Coyotes had not played in an MTE since the 2015 season.
The Coyotes return to the state of Florida for the first time since the 2016-17 season when USD competed in the Gulf Coast Showcase in Estero, Florida. Tuesday’s game is the first of back-to-back games for USD in the quick, two-day event. South Dakota could see Northern Illinois or Sam Houston State on Wednesday to wrap up the tournament.

The Coyotes are coming off a loss to Mississippi State in Starkville last Thursday. Paul Bruns was the lone Coyote with double-digit points after scoring 11 points off the bench in that game. Bruns has scored in double-figures in three of the four games thus far. He led the team with 11 points in Starkville and recorded a season-high 16 points versus Dakota State in the first week of the season. After his outing on Thursday, the sophomore has scored 500 points in his career. A.J. Plitzuweit continues to lead the offense with 16 points per game while Kruz Perrott-Hunt took over the team-lead in assists with three per game. Damani Hayes leads the team with 6.5 rebounds per game.

The Sharks
Long Island is also under a first-year head coach with former NBA player and G-League executive Rod Strickland taking the helm back on June 30. Strickland joined LIU from the NBA’s G League Ignite where he served as director of the professional path program since 2018. Strickland is no stranger to the collegiate basketball scene, as he previously held an administrative role at Kentucky under John Calipari, director of basketball operations at Memphis and an assistant coach at South Florida. Strickland is a 17-year NBA veteran that currently ranks 13th all-time in assists in league history.

Strickland has the Sharks off to a 1-2 start this season with their lone win over Mount Saint Vincent at home. LIU’s two losses this season came against teams fromt the Beach Division of the Fort Myers Tip-Off. The Sharks lost to Utah in the season-opener and fell to Marquette in the pre-tournament festivities. LIU finished 16-14 last season and won 12 of its 18 conference games. The Sharks saw their season come to an end last year in the second round of the Northeast Conference Tournament. Tre’ Wood is the team’s leading returner from the 2021-22 season, and currently averages 12 points per game and three rebounds. Sophomore Marko Maletic leads the scoring for LIU this year with 16 points per game on 41.5 percent shooting from the floor.

One Last Thing
South Dakota has a tough schedule this week with four games in the next seven days. After a back-to-back tournament, USD travels to Coastal Carolina on Saturday in Conway, South Carolina. Following the return home on Saturday night, the team will get Sunday off before playing a Monday night game against Mount Marty at home. At the end of the week, the team will have traveled a total of 3,790 miles from Vermillion to Fort Myers to Conway and back to Vermillion.