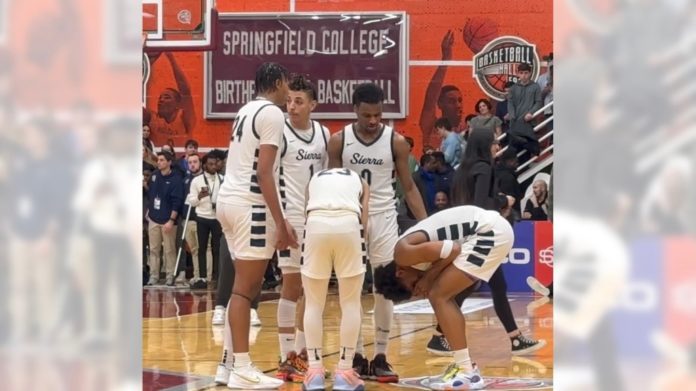 SPRINGFIELD, Mass. — Sierra Canyon’s Bronny James was just a freshman when he prompted a standing-room only crowd at the Spalding Hoophall Classic four years ago. As he ran onto the court Monday afternoon, the filled-out senior was, yet again, the reason for a rambunctious sea of fans watching his every move.

Young fans called Bronny’s name and stood where the baseline and sideline meet with their hands out hoping they’d get a quick high-five as he ran by. The public address announcer kept reminding fans to find their seats. Michigan coach Juwan Howard and Indiana coach Mike Woodson were in attendance, which spoke to the level of talent in the game.

It’s standing-room only roughly 30 minutes before Sierra Canyon and Christopher Columbus (FL) tip off at the Spalding Hoophall Classic. Bronny James – now a senior – returns for the last time after making an appearance as a freshman in 2020.

The birthplace of basketball was buzzing for a showdown of NBA sons from LeBron James, Penny Hardaway, Scottie Pippen and Carlos Boozer as Christopher Columbus (Fla.) edged Sierra Canyon 47-46 on a buzzer-beater from Malik Abdullahi on ESPN.

Sierra Canyon’s Isaiah Elohim missed the front-end of a 1-and-1 with 11 seconds left and a one-point lead that allowed Christopher Columbus to race down the length of the floor for an attempt at the rim from Cameron Boozer. Boozer lost the ball, but it fell right to Abdullahi for an uncontested layup with no time left.

“Sometimes the basketball Gods allow for certain things to fall in a certain way and the ball fell right into his hands for a layup,” Sierra Canyon coach Andre Chevalier said.

Despite the loss, Chevalier was pleased with his team’s effort, which he thinks will help for the rest of Mission League play and the (hopeful) CIF Southern Section Open Division playoffs.

“Jimmy didn’t worry about offense today. He focused on defense and rebounding the ball. That makes us better,” Chevalier said. “We’re not going to play against Cameron Boozer every night, so if Jimmy can have that effort in league play, that will make us a better team.”

Sierra Canyon is used to traveling, but the competition (and schedule) of the Mission League is new after coming from the Gold Coast League. The Trailblazers played Crespi Friday night before making the trek to the East Coast. They got straight onto a bus after Monday’s game and drove to Boston’s Logan Airport for an evening flight back to Los Angeles. The team will play at St. Francis Wednesday and play at Harvard-Westlake Friday.

“If you’re going to play in college, every game you play in is a high-level game. You have to learn how to travel, and pretty much be a pro,” Chevalier said. “(The team) is learning and understanding what it takes to travel, maintain their bodies and be able to perform.”

Sierra Canyon players declined to speak to the media after the game.

“Donovan Mitchell is a stud”