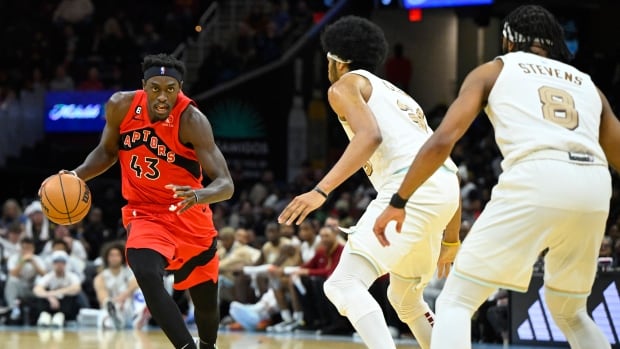 Pascal Siakam had 26 points and nine assists, O.G. Anunoby scored 26 points and the Toronto Raptors rolled to a 118-107 victory over the Cavaliers on Friday night, becoming the first East team to win in Cleveland this season.

Scottie Barnes scored 25 points and Fred VanVleet added 18, helping Toronto beat the Cavaliers for the third time in three games this season. The Raptors made a season-high 19 3-pointers, with Anunoby tying his career best with six.

“We just wanted to play with speed and be aggressive from the start, make them take tough shots and go out and gang rebound,” Anunoby said. “If we play with energy and play with force, good things will happen.”

VanVleet’s third 3 of the third quarter gave Toronto an 83-57 lead three minutes in, prompting Cleveland coach J.B. Bickerstaff to pull his entire starting lineup. Donovan Mitchell had four points at the time and finished with 12 on 4-of-16 shooting.

WATCH | Raptors deliver from beyond the arc:

Toronto wins 118-107 and becomes the first team in the Eastern Conference to claim a victory in Cleveland this season.

“They weren’t holding up their end of the bargain and they knew it,” Bickerstaff said. “If you get complacent in the NBA, someone will kick you in the face — and Toronto is a team that can do it.”

The Cavaliers fell to 16-3 at Rocket Mortgage FieldHouse, including 11-1 against the East. Minnesota and Sacramento are the other teams to win in Cleveland.

Darius Garland had 17 points and eight assists, and Isaac Okoro scored 15 points for the Cavaliers, who are 4-1 on their season-high, six-game homestand. Cedi Osman and Kevin Love each scored 13 points off the bench.

“This game is part of our growth and we have to keep that in mind,” Bickerstaff said. “Donovan is the oldest dude in our lineup and he’s only 26. We’re still a very young team that’s learning how to win in this league.”

The Raptors, who entered shooting an NBA-low 32.2 per cent on 3-pointers, made 12 of 21 in the first half and wound up shooting 51.4 per cent beyond the arc.

Toronto won for the second time in eight games and is 4-9 since beating the Cavaliers on Nov. 28.

“Pascal kept saying, `Don’t get bored with the lead, keep getting stops,”‘ Barnes said. “So we came out in that third quarter really strong. Fred make some shots, Pascal made some shots. We just came out ready to play.”

The Cavaliers announced a sellout crowd of 19,432, but the arena was less than two-thirds full as a result of sub-zero temperatures and poor road conditions in Northeast Ohio.