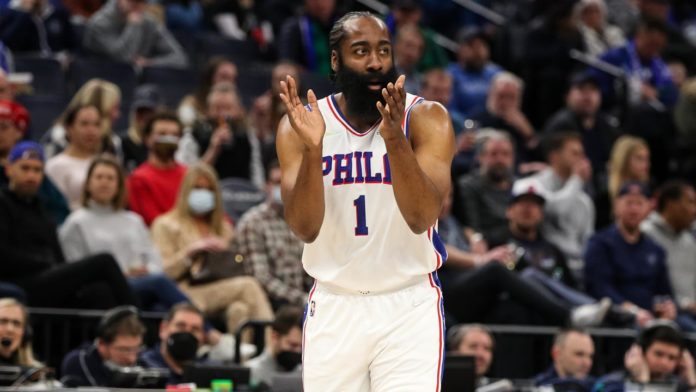 Harden, who has been in strong form since returning from a stint on the sidelines in which he missed 12 games, finished with 20 points, 21 assists and 11 rebounds from 40 minutes on the court to secure his first triple-double of the season and the 70th of his career.

However, it didn’t stop the 33-year-old from finishing with 20 points, 21 assists and 11 rebounds from his 40 minutes on the court.

Harden’s mind-boggling tally of 21 assists is the first time any player in the NBA has achieved the feat since Russell Westbrook accomplished it when playing for the Washington Wizards on May 10 in 2021.

The feat also meant Harden finally broke the mark of 17 assists, his previous career-high which he had achieved a whopping ten times.

‘Where am I going?’: Why alarm bells are ringing as Lakers face glaring LeBron truth

NBA Rumour Mill: Lakers’ targets to ‘watch’ and ‘likely’ trade plan; next NBA star who may want out

With 21 assists, it also meant Harden tied the Sixers’ franchise record and moved him into the elite company of Maurice Cheeks and Wilt Chamberlain as the only two Philly players to make 20 assists or more in a single game.

It wasn’t all smooth sailing for Philadelphia against the Clippers though, as the Californian side held a 63-51 lead at half-time and led by as many as 20 points at one stage.

However, a monster third quarter from the Sixers in which they outscored the Clippers 34-22 helped swing the momentum in their favour.

The final quarter was a tighter affair, but Philadelphia kept a fast-finishing Clippers team at bay to hold on for the win.

Why is Stephen Curry not playing for the Warriors against Charlotte Hornets and Utah...

“It’s absolutely easy, he’s the guy with the most to prove”