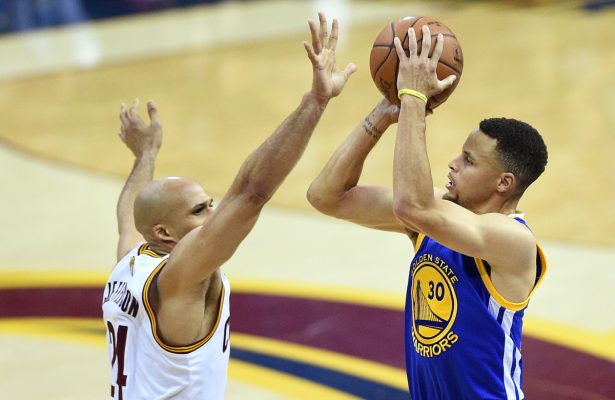 Golden State Warriors guard Stephen Curry is one of the greatest offensive players the NBA has ever seen. He consistently wows fans with his handles and absurd shooting ability.

While Curry has spent the majority of his career manning the point guard position for the Warriors, there are some that believe he isn’t really a point guard due to how much he plays off the ball.

Richard Jefferson, who was teammates with Curry for some time on the Warriors, is one of those people.

“Every single thing about his game says that he’s a two guard,” Jefferson said. “And people get mad, and they’re like, ‘No, he’s a point guard.’ But it’s like — he doesn’t truly initiate the offense. He doesn’t lead his team in assists. … His most deadly thing about him is when he plays off the ball.”

Jefferson definitely has a point. Curry’s best skill is arguably his shooting, as he’s the NBA’s all-time leader in 3-pointers made. He’s hit a total of 3,220 3-pointers in his career, making 42.8 percent of his attempts from downtown.

The two-time MVP has never been primarily known as a facilitator. He averages 6.5 assists per game for his career, which is definitely solid, but it’s not anything out of this world.

While people may disagree with Jefferson, Curry himself recently said that he isn’t a point guard while replying to fans on the internet.

“I would have to say you’re right,” Curry said in response to someone saying he’s a shooting guard. “And you have a lot of questions. But it doesn’t really matter what position you play, it’s just, ‘Can you play basketball?’ And we just figure it out. So you’re going to call Draymond [Green] the point guard and me the shooting guard, sounds great.”

The Davidson College product likely doesn’t care what position he plays as long as he is helping the Warriors win. The Warriors have struggled a bit this season, as they are currently 11-11 and in eighth place in the Western Conference. They don’t look anything like the team that won the 2022 NBA Finals against the Boston Celtics.

Curry, however, has continued to be his spectacular self. He’s currently recording 31.4 points, 6.7 rebounds and 7.0 assists per contest while connecting on 51.8 percent of his shots from the field and 43.6 percent of his attempts from deep.

Lakers News: Kobe Bryant Continues To Impact The NBA By Paving The Way For...