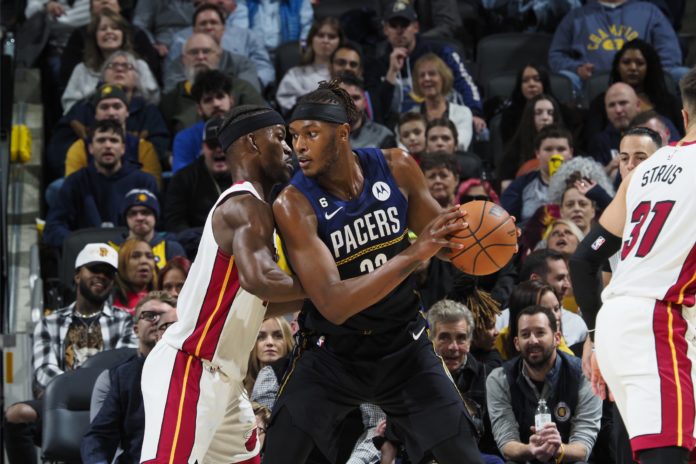 Myles Turner and the Indiana Pacers have opened up discussions on a potential contract extension, according to Shams Charania of the Athletic.

The 26-year-old has solidified himself as one of the best rim protectors in the NBA, and he is having his best scoring season to date during this 2022-23 campaign. Turner is averaging 16.7 points, 7.8 rebounds, and 2.1 blocks on an efficient 54.1 percent from the field. Amongst centers in the League, his accuracy from downtown is remarkable at 41.7 percent from three. The highest right now for the center position this year.

Despite being mentioned in some trade rumors in the past several months, it shouldn’t be surprising that the Pacers want to continue having Turner in Indiana. He can stretch the floor and defend at a high level: The quintessential modern-day big man that’s hard to find.

His experience of having already played eight seasons in the NBA increases Turner’s value. With Indiana’s promising young core of Tyrese Haliburton and rookie Bennedict Mathurin making their mark this season, Turner can help take this team to the next level. If negotiations break down, the 26-year-old can become a free agent when the season ends.

The Pacers (16-16) are currently ninth in the Eastern Conference, with the same record as the eighth-seeded Atlanta Hawks (16-16) and the seventh-seeded Miami Heat (16-16). Indiana will look to change that when they play their next game versus the Heat on Friday.

NBA govt would commerce Scottie Barnes for Kevin Durant, however not for Donovan Mitchell

Get to Know Keon Ellis