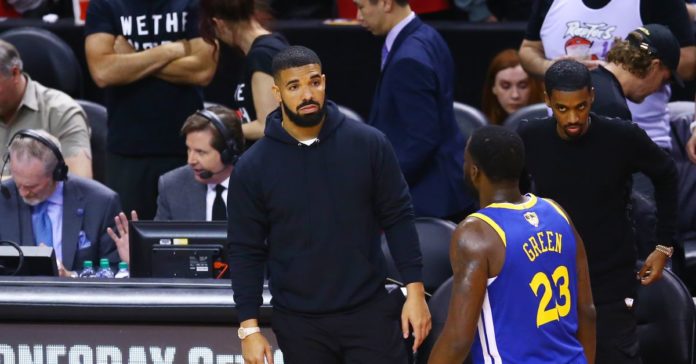 Ruh roh, the Golden State Warriors are headed out of the country as they square off in Toronto with the Raptors. Perfect time for Golden State to shake off that 2-14 road record!

The Raptors have lost four straight games, the last two being single possession games that went against them in devastating fashion. They fell to the Sacramento Kings 124-123, and then took a headshot from Kyrie Irving at the buzzer to lose to the Brooklyn Nets 119-116.

That’s tough. The Warriors can certainly relate to having an Irving shot give them a tough loss at home, as he drilled the momentum shifting dagger down the stretch of Game 7 in the 2016 Finals. That came in Golden State’s old home of Oracle Arena, where three years later the Dubs would be eliminated in Game 6 of the 2019 NBA Finals by the Raptors, in what would be the final game in that Oakland arena.

Since then the Warriors have returned back to their championship winning ways, while the Raptors try to find how they can return to title glory. They currently have a record of 13-16 on the season, and are going to be desperate to get a win to stop their current troubles. According to a recent Yahoo! sports article, they’re suffering from the same two-timeline issues the Warriors are:

But a third of the way through the 2022-23 season, the Raptors are 13-15, including 3-11 on the road. Problems abound, and while the poor three-point shooting will come around and the injuries will subside, the Raptors are learning that you cannot win at a high level while developing several young, inexperienced players; that sooner or later in the NBA, you need to pick a direction.

Meanwhile the 14-16 Warriors will have plenty of opportunities to develop their recent cadre of lottery picks as they head across the border to Canada without the services of Stephen Curry and Canadian basketball legend Andrew Wiggins.

That’s two All-Stars out of the picture for the Warriors, but that could lead to bigger opportunities for Jordan Poole and Jonathan Kuminga to get busy alongside the veterans Klay Thompson and Draymond Green.

Who ya got, Warriors or Raptors?

“I questioned if I even wanted to play basketball again”- Dwight Howard says not...