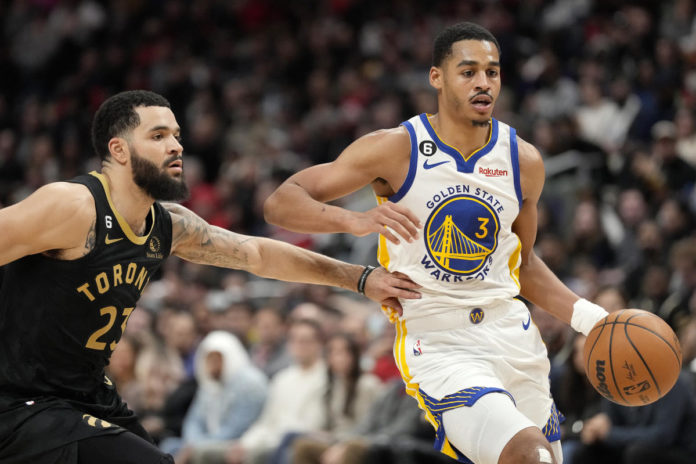 TORONTO (AP) — Jordan Poole scored a career-high 43 points, Klay Thompson had 17 and the Golden State Warriors won for the first time in five tries this season without the injured Stephen Curry, beating the Toronto Raptors 126-110 on Sunday night.

Draymond Green returned after sitting out Friday’s loss at Philadelphia because of a sore right quadriceps and finished with 17 points and nine rebounds in 37 minutes as Golden State snapped a three-game losing streak and improved to 3-14 on the road.

Golden State’s Andrew Wiggins sat for the seventh straight game because of a strained right adductor, missing another chance to play in his Canadian home town for the first time since Jan. 30, 2018, when he was with Minnesota.

Green scored Golden State’s first nine points on a trio of 3-pointers, one more than he’d made in any complete game all season. Green had 13 points in the first and the Warriors went 8 for 14 from long distance and led 36-26 after one period.

The Warriors had as many made 3-pointers in the first quarter as Toronto had total baskets. The Raptors took five shots on one possession in the second quarter and missed them all. Poole scored 15 points in the second and Golden State led 68-54 at halftime.

Poole and Thompson each had nine points in the third and the Warriors made 5 of 7 from long range. Golden State took a 102-80 lead to the fourth.

Warriors: Thompson and Green played in Toronto for the first time since Game 5 of the 2019 NBA Finals. Curry has not played north of the border since that series. … Poole topped 30 points for the fifth time this season. He shot 10 for 11 at the line. … Golden State had 11 assists on 13 made baskets in the first quarter. The Warriors had more assists (18) in the first half than rebounds (17).

Raptors: At Philadelphia on Monday night.