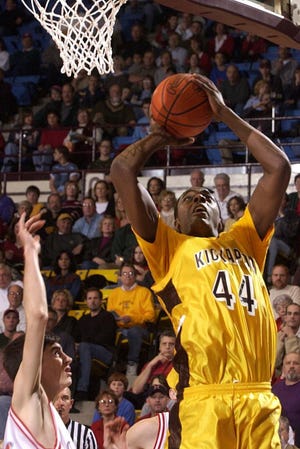 The 2022 NBA Draft will take place Thursday night and it could bring southwest Missouri a bit of history.

According to Basketball-Reference, only four players who attended high school in southwest Missouri have gone on to play in the NBA. An additional player was born in our coverage area but played high school basketball in California.

None of the players who attended high school in the area have been drafted.

But Thursday could change that with the possibility of Greenwood’s Aminu Mohammed being selected after one season at Georgetown. The draft begins at 7 p.m. on ESPN.

Here are the players from the region who have appeared in the NBA:

One of the most recognizable names in southwest Missouri sports history, Tolliver has enjoyed a lengthy NBA career since first joining the league in 2008-09.

The Kickapoo grad has played for 11 teams over his career. He averaged 19.4 minutes in his 730 appearances with 105 total starts. He’s not officially retired but he last played in 2020-21 in 11 games with the Philadelphia 76ers.

Tolliver went undrafted out of Creighton in 2007 and earned the career he had. It began with the Iowa Energy in the NBA D-League (now G League) before a stint in Germany and another D-League appearance. In 2009, he got a chance with the Portland Trailblazers and then later earned his way on with the Golden State Warriors.

With the Warriors, Tolliver showed he belonged while averaging 12.3 points and 7.3 rebounds per game. He made 29 starts and had four games in which he scored 25 or more.

The journeyman has been a reliable role player and veteran presence for teams across the league. He’s played in Atlanta, Minnesota, Detroit, Charlotte, Phoenix, Portland, Sacramento, Memphis and Philadelphia. He’s appeared in 14 postseason games.

Tolliver, of course, played on perhaps the greatest high school basketball team in southwest Missouri’s history. He was one of four players on his Kickapoo team that played Division I basketball. His senior year in 2002-03 was ranked 12th by USA Today at the season’s end while also winning a state championship.

The Waynesville grad was recently on the roster for the Eastern Conference champion Boston Celtics as he wrapped up his third year in the league.

Morgan, an undrafted free agent in 2019, earned his way into the league with stops at Utah, Toronto and Boston.

Utah gave him his first chance with 50 appearances during his first two years in the league. He averaged 5.6 minutes, 1.4 points and 1.1 rebounds.

Morgan started the 2021-22 season with Toronto on a 10-day contract and made one appearance with 27 minutes played against the Cavaliers. He scored five points and grabbed four rebounds.

Out of high school, Morgan was the No. 89 player according to the 247Sports Composite. He was a Mr. Basketball finalist and picked up conference player of the year honors as a senior while averaging 18 points, 10 rebounds and four blocks.

The latest player to enter the league from the area is Jones, who played some high school ball at Link Year Prep in Branson.

Jones grew up in DeSoto, Texas, and didn’t start playing basketball until his senior year of high school at Triple A Academy in Dallas before attending Link Year Prep for a season. He then signed to play at Connors State College before transferring to Arkansas.

Jones went undrafted in 2020 and signed a two-way contract with the Houston Rockets. He was later waived before signing a 10-day contract with the Rockets. In total, he played 26 games with Houston and made one start during the 2020-21 season. He averaged 5.8 points, two rebounds and 1.5 assists.

After his 10-day contract was up, he signed a two-way deal with the 76ers and appeared in six games.

In 2021-22, he signed a two-way deal with the Los Angeles Lakers. He was named an All-NBA G League First Teamer this past season.

The former Branson standout enjoyed a brief NBA career that included two minutes of game time in one game. Hill made one of his two baskets and grabbed three rebounds with the Oklahoma City Thunder in 2008.

The 7-footer was undrafted out of Arkansas in 2008. With the Razorbacks, he shined and earned SEC Defensive Player of the Year accolades as a junior.

Hill signed with the Blazers initially before signing with the Thunder. He was assigned to the THunder’s D-League affiliate. He also made summer league and training camp appearances with the Timberwolves and Kings.

At Branson, Hill was a two-time all-state selection in 2003 and 2004. His 616 blocked shots still rank second in state history.

Born in West Plains, Carty played his high school ball on the west coast with Sherman E. Burroughs in Ridgecrest, California. He then played with Oregon State and was a sixth-round pick by the St. Louis Hawks in the 1962 NBA Draft

He didn’t make an NBA appearance until 1968-69 when he played in 28 games with the Los Angeles Lakers as a 27-year-old. He played alongside Jerry West and Elgin Baylor.

Carty averaged 2.7 points and 2.1 rebounds in an average of 6.9 minutes per appearance.

Wyatt D. Wheeler is a reporter and columnist with the Springfield News-Leader. You can contact him at 417-371-6987, by email at [email protected] or Twitter at @WyattWheeler_NL. He’s also the co-host of Sports Talk on Jock Radio weekdays from 4-6 p.m.

“That 18 LeBron was different… We’ll have to ask Bron someday what he thinks...

NBA scout has high praise for Jalen Hood-Schifino at IU’s Pro Day – The...