Mike Muscala will be sidelined and re-evaluated for two weeks due to fractured left pinky finger, the Oklahoma City Thunder announced on Tuesday per ESPN’s Adrian Wojnarowski.

The injury occured during OKC’s Monday loss against the New York Knicks, wherein the veteran chalked up three markers, a board and an assists in eight minutes.

In 14 games played, Muscala is averaging 6.0 points, 3.5 boards in 43.3 percent shooting for Thunder in 12.8 minutes played. His absence will only allow Aleksej Pokusevski, Jeremiah Robinson-Earl, Darius Bazley and Kenrich Williams to split up his rotational minutes.

Muscala will earn a total of $3.5MM this season and has a player option next season with the same value. He was re-signed by the club last summer. 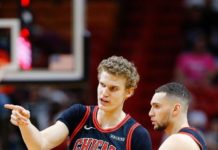 How To Bet On The Breeders Cup With Kansas Sports Betting Sites For Horse...

The latest on the Knicks – NBA Blog