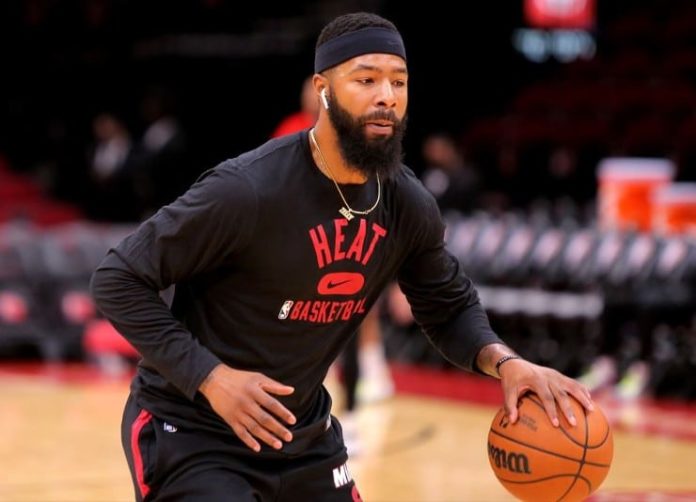 The Brooklyn Nets are in advanced discussions to sign Markieff Morris, according to Marc Stein. The 6’9″ forward is currently a free agent. He’s expected to sign a veteran-minimum deal.

“The Nets indeed have registered the most serious interest in signing Markieff Morris, league sources say, but Philadelphia has also explored the feasibility of signing the Philly native,” explains Stein.

“Brooklyn, in particular, has a need for a veteran who can command the respect of mercurial stars Kevin Durant and Kyrie Irving.”

“Is Morris, who turns 33 on Sept. 2, that player? Word is he was not afraid, in his time as a Laker, to speak his mind in a locker room that housed James and Anthony Davis.”

Of course, Morris was selected 13th overall by the Phoenix Suns in the 2011 NBA Draft. He played his first four full seasons with the Suns.

Then, on February 18, 2016, the Suns traded him to the Washington Wizards for DeJuan Blair, Khris Humphries and a 2016 first-round draft pick.

After three full seasons with the Wizards, the team traded Morris, cash and a 2023 second-round draft pick to the New Orleans Pelicans for Wesley Johnson on February 7, 2019.

Nonetheless, the Pelicans waived him on the same day.

He finished the remainder of the 2018-19 season with the Oklahoma City Thunder.

During the 2019 offseason, Morris signed as a free agent with the Detroit Pistons. However, his time in the Motor City was short-lived. The forward was waived on February 21, 2020.

He then signed with the Los Angeles Lakers for the rest of the 2019-20 season. And the Philadelphia native helped the Lakers defeat the Miami Heat in six games of the 2020 NBA Finals.

Morris averaged 7.5 points, 3.3 rebounds and 1.2 assists per game against Miami.

The veteran forward bolsters their frontcourt

The 32-year-old received attention last season when Denver Nuggets center Nikola Jokic shoved him from behind after a play ended. Seconds earlier, Morris fouled Jokic near mid-court. This occurred in the Nuggets’ 113-96 win against the Heat on November 8, 2021.

Afterwards, Morris was fined $50,000 and Jokic received a one-game suspension. The Heat forward was also diagnosed with whiplash.

Markieff Morris should improve the Nets’ frontcourt. Ever since Kevin Durant rescinded his trade request, improving wing depth has been one of the top priorities for the front office.

“In this League we all Could be Gone Except for Stephen Curry”: Steve Kerr’s...

Kuminga, Wiseman and an ‘exciting prospect’