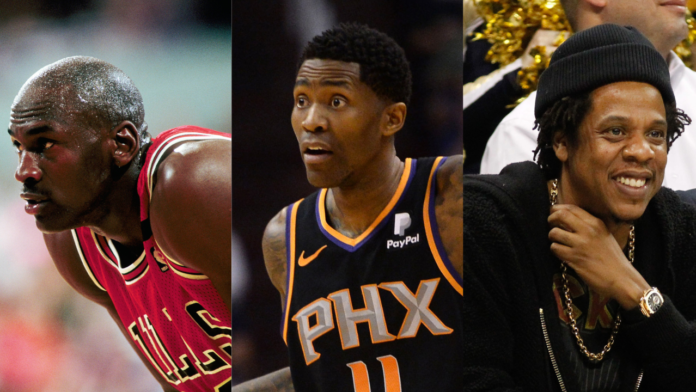 Michael Jordan has the connections, you can bet. A man whose name is so transcendent from the sport he plays that a singular mention of basketball and the first player you can think of is, the Chicago Bulls legend.

Having a repertoire so big means that you can get access to people in all kinds of verticals. Whether it is politics or music. One Ex-NBA player and TNT’s latest host found this out in a surprising way.

Imagine, you wish to meet your favorite hip-hop artist and all you have to do is utter his name. That would be like something out of Aladdin, right? For Jamal Crawford, it actually did happen and it was all thanks to Michael Jordan.

Now, you might be thinking how on earth Jamal Crawford and Michael Jordan could be friends? MJ was a fan of Crawford’s game before he was even drafted. And once Crawford was picked by the Bulls in 2000, the trainer Tim Grover made a meeting between the possible.

Since that point, Jamal was invited by MJ himself to pick up games and their friendship became deeper than ever. Crawford, who was an MJ fan growing up said that he felt it was surreal. And how this friendship helped him meet Jay-Z.

Jay-Z, perhaps one of hip-hop’s most iconic names is not an easy person to get attendance with. For Michael Jordan, however, it was easy.

Crawford said, “That kind of went into me meeting Jay-Z. Imagine getting so tight with Michael Jordan you’re like ‘Hey I wanna meet Jay-Z and he’s like ‘OK,’ and he makes it happens like that. It was unbelievable.”.

Yes, one phone call was all it took.

A crew that keeps burgeoning every day, Inside the NBA on TNT just added Jamal Crawford. The Ex-NBA Veteran and 3-time sixth man of the year winner joins the likes of Shaquille O’Neal, Charles Barkley, Dwyane Wade, and Candace Parker.

As an analyst, Jamal’s insights are noteworthy. He has often shown an eye for insight and has displayed his understanding of the game for the world to see. We are sure he will add to the cheerful and humorous cast of the TNT crew.

Michael Jordan would also be proud to see not one, but two of his friends on the cast.

Also read: “LeBron James, That Was Your Shot to Take!”: Skip Bayless Finds a Way to Blame ‘The King’ as Russell Westbrook Cost Lakers 113-112 Loss

Blake Griffin: “It’s a different atmosphere than I’m used to”

“He was never scared to be himself”