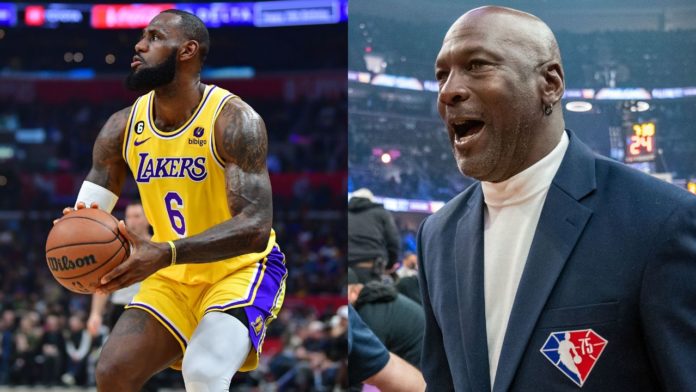 No matter what he does, LeBron James just can’t escape the NBA community. For example, there are the GOAT debates at every twist and turn, which he will admittedly never win.

Whether that’s up to the greatness of Michael Jordan, or the bias of the NBA community, that’s for you to decide.

In the past, the King has been put down in these debates in a myriad of ways. Sometimes it was his number of championships (4), or perhaps even who he had to get past to win at all. Other times, it was due to something a tad bit more incalculable, such as the clutch gene.

But now, there is a brand-new reason in town. And boy, it may just be the most awkward one of all time.

Also Read: Having Bought Vanessa Bryant a $4 Million Ring, Kobe Bryant Spoke About Why They Got Married So Early

LeBron James has one of the most skilled games of all time, and it’s pretty hard to deny.

As a scorer, he is so good, that Kareem Abdul-Jabbar’s record, something that hasn’t been broken in 38 years, is now within the reach. And of course that doesn’t even cover his prowess as a facilitator.

So, why is he catching flack for his game from analysts Chris Broussard and Rob Parker?

Well, just take a look at what they had to say.

“As great as LeBron is, and both you and I have him as the second-best player ever to [Michael] Jordan, his — and I actually think, I think Jordan was just better, period — but I also think, Rob, particularly with the casual fan, I think one of the things that works in Jordan’s favor — and maybe right now in Steph’s (Stephen Curry) favor — is that their games are prettier than LeBron’s,” Broussard said.

“His game isn’t really that pretty,” he said. “He’s a great passer, but he don’t pass like Magic [Johnson].

Jordan flying through the air, he was so graceful, like Kobe [Bryant] on steroids. I think that stuff matters, and Steph, just from the range he shoots with, the handle he has.

People talk about Kyrie [Irving], who I do think has the best handle ever in the NBA, but Steph’s up there. Steph’s handle is great. He can finish at the rim. …

LeBron is like Karl Malone with point guard skills. … And he can shoot, but it’s just not as fun to look at and watch as some of these guys I mentioned.”

Admittedly, their description of LeBron James as a Karl Malone with point guard skills isn’t excessively obnoxious. Perhaps there is even some truth to it.

However, holding the way he looks while he plays?

Is this basketball, or a modeling contest?

Where does LeBron James stack up on the All-time assists list?

As mentioned prior, scoring buckets isn’t the only way LeBron James plays.

But, how great is he really? Or more specifically, how does he stack up in career assists against the greatest dime-droppers of all time?

Heck, if everything goes right, he may even pass him by the end of the season.

Not too bad for someone who doesn’t look too good playing basketball.