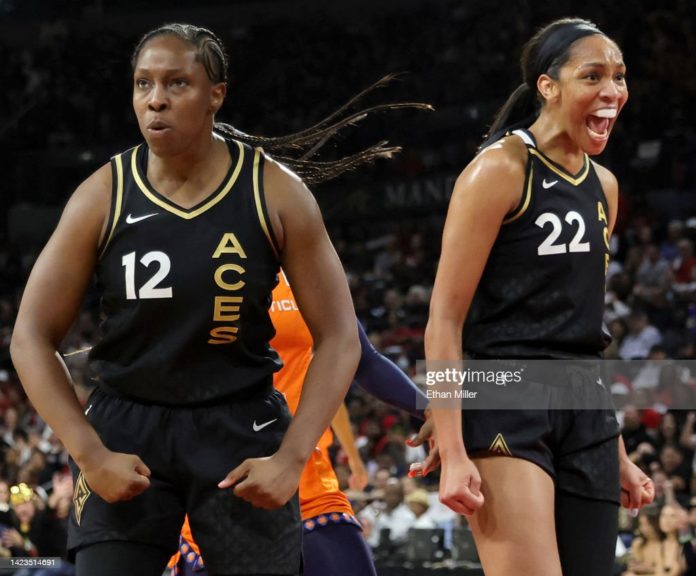 The Las Vegas Aces made history on Sunday after winning the franchise’s first WNBA championship. the perfect way to end a monumental season by the Aces, who already took home the Commissioner’s Cup earlier in the year and finished the regular season with a League-best 26-10 record.

Coach Becky Hammon had a dominant showing as a rookie head coach, winning 2022 Coach of the Year as a result of her banner year.

Chelsea Gray won Finals MVP after averaging 18.3 points and 6.0 assists per game on 45 percent shooting from beyond the arc. The Duke alum dropped a game-high 20 points, five rebounds, and six assists on 9-13 shooting from the field on Sunday, Game 4, to beat the Connecticut Sun.

The series-clinching win helped Las Vegas become the first team since the Washington Mystics in 2019 to have two different players winning the regular season and Finals MVP in the same season.

Gray joined her fellow teammate, A’ja Wilson, in doing so. Wilson took home League MVP after averaging 19.5 points, 9.4 rebounds, and 1.9 blocks per game on 50.1 percent shooting from the field and 37.3 percent from beyond the arc.

As for Kelsey Plum, she brought home some silverware of her own after her dazzling performance at the WNBA All-Star Game, dropping an All-Star Game record 30 points to take home the All-Star game MVP.

When you have players capable of being awarded any MVP honor, it is bound to be a recipe for disaster. Although Gray was not selected as an All-Star or All-WNBA team selection, her ability to step up in big moments is what separates her from other stars in the league. The Aces guard proved that on the biggest stage of them all, winning her second championship.

Furkan Korkmaz: “I don’t want to complain about the schedule”