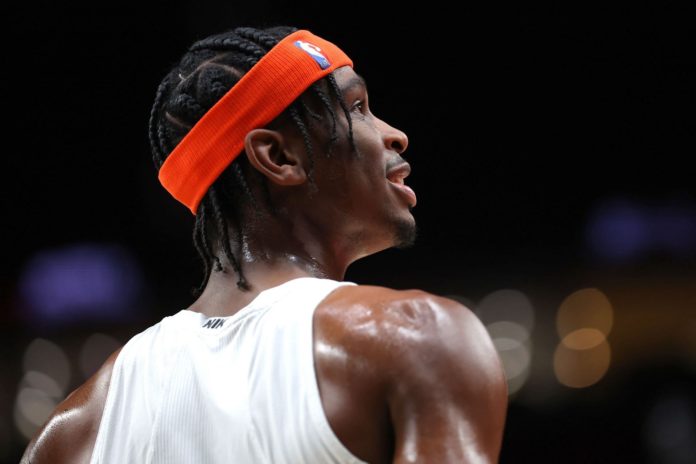 OKC Thunder rising star Shai Gilgeous-Alexander offered some interesting takes when discussing matters with some young hoopers at a camp. Comparing the likes of Kobe Bryant, Michael Jordan, Kevin Durant and other greats, SGA got into a debate while sharing his perspective with a group of youngsters.

Shai Gilgeous-Alexander has garnered a lot of attention this season. After emerging as a borderline superstar with the Thunder this season, SGA has wowed audiences with his tremendous display of offensive skill.

The Thunder star has established himself as a player to take note of. However, in a recent video, Gilgeous-Alexander garnered attention for rather different reasons.

In the video, Shai was seen engaging in a debate with some young hoopers at a basketball camp. While this is a fairly common sight for basketball players, the nature of the debate raises some eyebrows.

The topic of the debate happened to be the comparison between all-time greats such as Kobe Bryant and Michael Jordan.

Considering that Jordan is widely regarded as the greatest player of all time, a debate involving Jordan is often viewed as a controversial matter.

SGA offered some interesting takes on the topic when debating with the young hoopers. He started off by comparing Michael Jordan to Kobe Bryant. With a wild comparison in mind, he claimed:

While the youngsters tried to contradict the OKC superstar, he defended his claim by saying:

“Kobe has five rings, what are you saying? All I’m saying, all-around, Kobe Bryant.”

When another hooper claimed that Kevin Durant was better than Bryant purely on skill alone, Shai had to agree. He added to this by saying:

“Skills alone KD is one. KD is seven feet and can do everything Steph Curry can do. Come on.

“Competitive nature. Championships. It’s a lot of stuff that goes into it. Remember I told you that.”

However, SGA’s most controversial take was still a bit away. When asked to rank Kobe, LeBron James and MJ, the guard said:

“Kobe is Michael Jordan on steroids”

Shai Gilgeous-Alexander: “Kobe is Michael Jordan on steroids”“Kevin Durant is 7 feet tall and can do everything Steph Curry can do” https://t.co/vYJck6cY23

Shai’s claims certainly raise a lot of questions about the way he perceives basketball. However, an important to note is the manner in which SGA concluded his statement.

While highlighting that all of them were the “best ever,” Shai managed to express his point of view without denigrating either player. This gives him some degree of deniability after making a rather bold statement.

Shai Gilgeous-Alexander offered a rather rare take when listing Kobe Bryant as the best player of all-time. Considering that the GOAT debate has recently featured installments of the MJ vs LeBron argument, SGA mentioning Bryant is rather refreshing.

Bryant’s claim to being the GOAT is also hard to ignore. With five NBA titles and two Finals MVP’s, Bryant certainly has the silverware to earn a mention. Considering his impact, legacy and sheer statistical brilliance over the course of a 20-year career, the “Black Mamba” also presents a solid case for himself.

Bryant is widely regarded as one of the most skilled offensive players of all-time. While several would suggest that Kevin Durant surpasses Kobe, Bryant was simply cut from a different cloth.

Shai Gilgeous-Alexander’s take on the matter also reflects his own approach to the game. As one of the most gifted offensive players among the new batch of guards, the OKC star has good reason to view a bonafide bucket-getter such as Bryant as the greatest to ever do it.

Also Read: Shai Gilgeous-Alexander’s unique NBA record which puts him in Wilt Chamberlain’s company: All you need to know

6 players on the rise in NBA Fantasy

“Your Days in the League Are Numbered”: Blood-Ridden Scenes at NBA Game Could Be...

Joel Embiid weighing which team to play for in 2024 Olympics

Kyrie Irving is back, and here’s why history tells us that’s actually bad news...