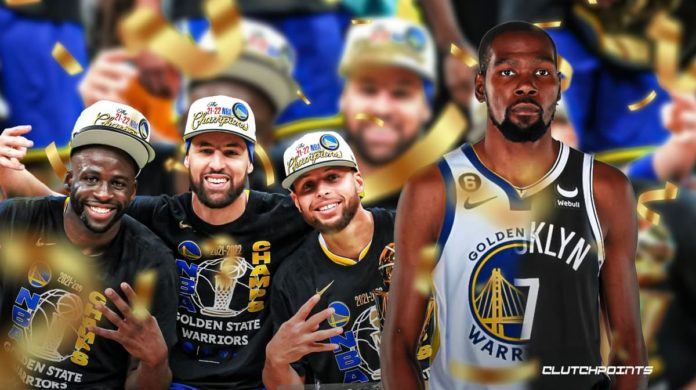 For three seasons, the Golden State Warriors basically became the epitome of when a bored 2K player cranks up the sliders to 100. The Warriors infamously added Kevin Durant to a 73-win team led by the dynastic core of Stephen Curry, Klay Thompson, and Draymond Green and proceeded to run roughshod on the league, winning two championships and just falling short of a third due to injuries.

So it may have stung, even for just a little, when the Warriors managed to win their fourth title over the past decade despite Durant’s move to the Brooklyn Nets in 2019. And even Durant admitted that he hated seeing the Warriors win the 2022 NBA championship. But it’s not for the reasons one would think of immediately.

Speaking with Michael Lee of the Washington Post, Kevin Durant didn’t appreciate how fans decided to invoke his name amid the Warriors’ triumph. In the process, some may have invalidated Durant’s championship involvement in Golden State, saying that the Warriors didn’t really need him to win a title.

“I can’t lie: Watching the Finals, I knew so many people would turn their focus on me once they won. I was like, I hate that they won, because y’all not going to make it about them; it’s going to be all about me. I think it’s just a childish way of looking at that experience. I feel like you can take it all in and appreciate what they and not even talk about me. I was just sitting at home. But I get how it is,” Durant said.

Fans’ frustrations towards Kevin Durant’s free agency move in 2016 remain understandable. His move robbed the Warriors of their greatest rival – the Oklahoma City Thunder. And for two years, it seemed as if a Warriors’ championship triumph was a mere inevitability.

Still, it’s been three years since Durant moved on from the Bay Area. KD achieved what he set out to achieve when he moved to Golden State. And perhaps fans should move on too. Now comes the “hardest road” for the Slim Reaper: leading the Nets to a deep playoff run after such a horrid start to the 2022-23 season.