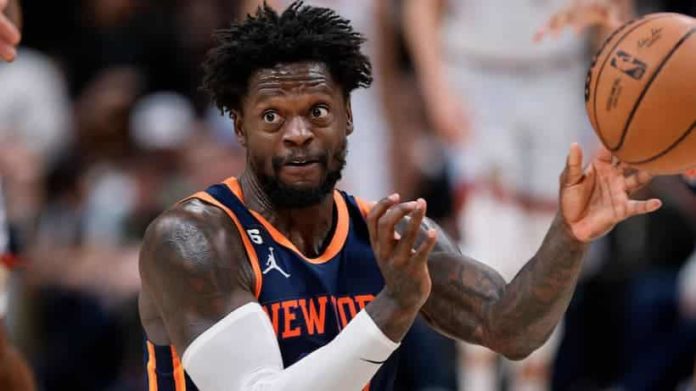 Regardless of the teams overall success the past few seasons, Julius Randle has been the Knicks best player and he embraces that role. This year, his (24.5) points and (10.5) rebounds per game lead the team. He has the ability to score at all three levels and can match up with any position on defense. In the Knicks 117-104 win vs the Pistons yesterday, Randle joined a Knick’s legend and NBA Hall of Famer with his dominant performance.

Randle joined the infamous Patrick Ewing as the only other player in Knicks history to have 40+ points and 15+ rebounds in a game. He also had a season-high 42 points in the teams win as well. The big man may not earn an all-star bid this season, but he’s been his team’s go-to guy and knows he’s invaluable regardless of what happens.

New York Sports Betting sites have the Knicks at (+12500) to win the Finals this season.

Julius Randle became the first Knick since Patrick Ewing in 1996 to drop 40+ PTS and 15+ REB as he led the @nyknicks to the road W!

The legendary Patrick Ewing had a 40-15 game back in 1996 and Julius Randle matched that effort with his 42-15-4 performance on Sunday afternoon vs the Detroit Piston’s. He’s been averaging (28.6) points and (13.0) rebounds since Dec. 7, and also passed Bernard King for 25th on the Knicks all-time scoring list last night. Randle had this to say after the game after learning he was in rare company with the legendary Patrick Ewing.

“Man, he’s a legend. Respect to him.”… “Just lets you know the kind of work that he put in when he wore his jersey. I’m honored and blessed to be able to do something that he did.” – Julius Randle

New York are sixth in the East right now and are six-games over .500 at 25-19. The team has also gone 15-6 in their last 21 games and they’ve bee riding a wave of momentum. MLK Day is today and the league will have games happening throughout the entire day today. At 3:00pm, the Knicks will be hosting the Toronto Raptors in the second game of a back-to-back.

Sacramento Kings are the most fun team in the NBA