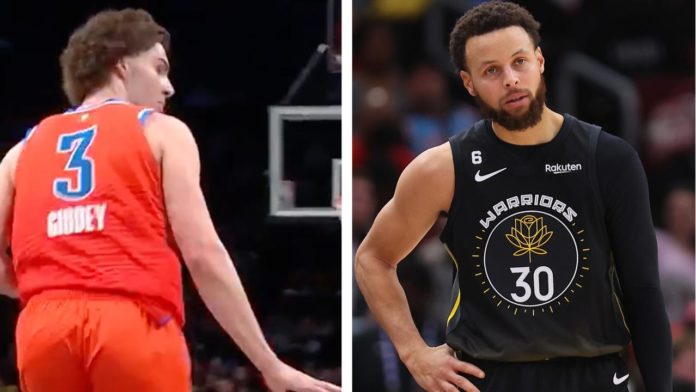 The Aussie led the OKC Thunder brilliantly in Monday’s 112-102 road win over the Brooklyn Nets (all times AEDT) with 28 points – equalling a career-high and setting a new season-high – to go with nine rebounds and nine assists to narrowly fall short of a triple-double in yet another masterclass.

Giddey scored 11 points in the fourth quarter alone including seven-straight points for the Thunder to open the period to equal the scores. It surged a big Thunder run in the final stanza as they pushed ahead on the scoreboard, going up 99-92 after a barrage of threes from Isaiah Joe and Lu Dort.

After sitting the next several minutes, Giddey returned late in the contest and tied his career-high with a floater with 1:15 left in the game to help seal the Thunder win.

“He was such a big part on slam the door on the Nets tonight,” OKC play-by-play commentator Chris Fisher said of Giddey.

It continued the Aussie’s insane recent stretch – scoring 20-plus points in eight of his last 12 outings including three in a row – coming off a 25-point performance against Chicago on Saturday.

“I thought he used his size, he was physical with the basketball and he called his number when he needed to,” Thunder called Michael Cage said.

“And how about setting up his teammates? He was on serious triple-double watch tonight.”

With it, the Thunder won their fifth game from their last six including three in a row to creep closer to .500 at 21-23 and sit on the brink of the play-in tournament – holding the same record as the 10th-placed Suns.

The Nets, who were without Ben Simmons (back soreness) and Kevin Durant (MCL) meanwhile suffered a second-straight loss to fall to 27-15.

Earlier, Giddey made two tough drives to the hoop in the third – signalling a ‘too small’ gesture to Nets big man Nic Claxton after the first and converting an and-one play on the second.

It was a bold move towards Claxton, who ranks first in the NBA in blocks (2.6 per game), while it came after Giddey and the big man got into during the period and exchanged words in a tense clash.

It was ultimately one of Giddey’s best games yet as the 20-year old continues to flourish in his second season.

“A sign of progress for a young player is consistency. Josh Giddey on the cusp of his 30th double-digit scoring night in his last 32 games,” Thunder sideline commentator Nick Gallo said of Giddey in the first half.

“He’s continuing to score within the floor of how the Thunder wants to play – out in transition and with physicality on hard drives like that one when he barrels into the rim.

“This is a guy who continues to work on his game. I talked to Shai Gilgeous-Alexander about him, he said: ‘When you work hard and work on the right things, it will show. He’s really leaned into that effort on the inside in the practice facility and in the weight room.’

“That is just going to continue to progress for Josh – not even 21 years old yet and we’re continuing to see him take strides forward.”

Elsewhere, Gilgeous-Alexander was his reliable self with an equal game-high 28 points plus seven rebounds, while Dort chipped in 22 points too.

Claxton put in his own strong performance for the Nets with 16 points, 13 rebounds and four blocks, and Seth Curry led the hosts in scoring with 23 off the bench.

Giddey was set to face off with fellow Aussie Simmons for the first time ever in the contest, however back soreness forced Simmons to be a late out for the game in a brutal blow for a Nets team trying to navigate through a stretch without Durant.

Of course, Simmons missed all of last season – Giddey’s rookie campaign – during his trade standoff with the Philadelphia 76ers before being traded to Brooklyn. He sat out the rest of the season due to back soreness that required surgery.

“Bringing Up Stephen Curry? It Was All God!”: Sonya Curry hails the lord for...