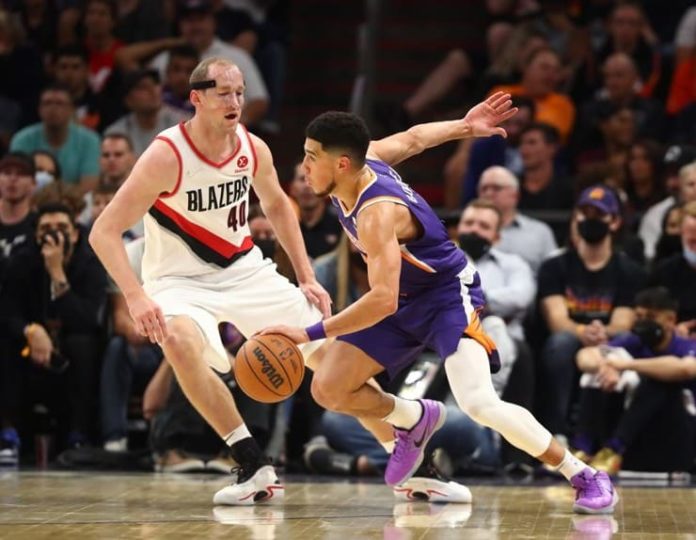 The Utah Jazz have signed center Micah Potter to a two-way contract and center Cody Zeller to a training camp deal. Potter went undrafted in 2021 out of Wisconsin.

During the NBA 2K23 Summer League, while with the New York Knicks, Potter averaged 5.6 points and 2.8 rebounds per game in five appearances.

On September 10, 2021, Potter signed a deal with the Miami Heat. However, he was waived by the team a month later without an NBA appearance. After the Jazz signed him, he tweeted: “God is good! Thankful for the opportunity! Time to work!”

He finished 30th in the G League for blocks (12) and third in total rebounds (324). The Wisconsin product was selected to the NBA G League All-Rookie Team.

Then, the Ohio native inked a 10-day contract with the Detroit Pistons on December 29, 2021.

Last season, in three games played with the Pistons, the 6’10” center averaged 4 points and 3 rebounds per contest. Plus, he averaged 45.5% shooting from the field.

Furthermore, on January 5, 2022, in the Pistons’ 140-111 blowout loss against the Charlotte Hornets, Potter scored a career-high 8 points and 6 rebounds in 16 minutes of action.

Meanwhile, Cody Zeller was selected fourth overall by the Charlote Bobcats (Hornets) in the 2013 NBA Draft. He played two NCAA seasons with Indiana. The 29-year-old will have the opportunity to play with the Jazz next season.

Of course, in his rookie 2013-14 season, the center averaged 6 points, 4.3 rebounds, and 1.1 assists per game. The Indiana native was selected to the NBA All-Rookie Second Team.

In the 2019-20 season, Zeller averaged career highs 11.1 points and 7.1 rebounds per game with the Hornets. Maybe he’ll be able to help the Jazz off the bench.

Additionally, the center went on to play his first eight NBA seasons with Charlotte.

An Exhibit 10 contract can be converted into a two-way contract. The nine-year veteran will have to give it his all during training camp. Though, he might prefer playing with the Salt Lake City Stars, Utah’s G League affiliate.

More news stories pertaining to Micah Poter, Cody Zeller, and the Jazz are on the main page.

Stephen A. Smith: I can not see Kevin Durant sitting out subsequent season as...