The Utah Jazz have strong considerations to bar both Lauri Markkanen and Jordan Clarkson.

Per Yahoo! Sports’ Jake Fischer, the Jazz intends to keep both Markkanen and Clarkson. Meanwhile, they have hung a high asking price for Jarred Vanderbilt, making Malik Beasley, Mike Conley, and Kelly Olynyk as the team’s probable trading chips by the February trade deadline this season.

After being shipped to Utah in a package which delivered Donovan Mitchell to Cleveland in return, Markkanen found a new home as a Jazzman and is enjoying a season of emergence. He is currently averaging 22.4 points, 8.5 rebounds, 2.4 assists in 53.9 percent shooting , as these numbers are making such noise for his case to become an All-Star for the first time in his career.

As he was previously tagged as a possible part of Utah’s offseason fire sale, Clarkson is continuing to thrive upon the call up made by coach Will Hardy, registering 19 starting games with career high 19.0 points average to go with 4.6 assists and 3.9 rebounds.

With the Jazz shockingly poised to keep their momentum going as one of the top teams so far to begin the season, both cagers are no doubt instrumental on what would be their plans as they move along and put on a solid season defying odds and expectations. 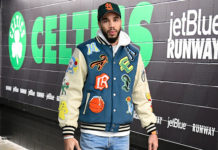