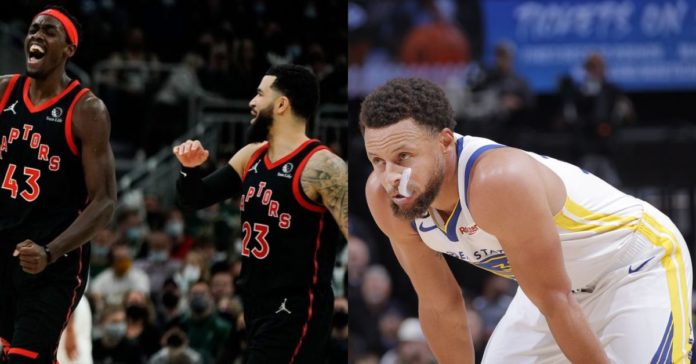 The Golden State Warriors will be visiting the Toronto Raptors in the NBA on Sunday night. Both teams enter the game with a fair share of injuries. Both teams are in the bottom half of their respective conference and on a losing streak. Needless to say, we’ll get to see one team break their losing streak tonight. Let’s take a look at the situation surrounding both teams before the match-up.

Golden State is currently sitting 11th in the Western Conference and has a record of 14 wins and 16 losses. They have a 4-6 run in the league and carry a 3-game losing streak before they face the Raptors. By their standards, they have had a disastrous season. Most of the blame goes to the injuries they have had. The Warriors this season has not shown any real signs of a come-back this season.

As these teams collide on Sunday night let’s have a look at the availability statuses of players of both teams. Understand the expected rosters both teams will come out with, and the expert predictions for the game.

Stephen Curry is out for the Golden State Warriors

The Warriors are looking to be without their star man Steph Curry for at least a month. Steph picked up an injury midway through the 3rd quarter against the Indiana Pacers. The Golden State is running out of its depth at the moment as they have 3 key players listed ‘out’ from them. The responsibility now befalls upon Klay Thompson and Jordan Poole, who themselves are in a bit of a slump.

Stephen Curry, who suffered an injury during last night’s game in Indiana, underwent an MRI today.

The MRI confirmed that Stephen experienced a left shoulder subluxation. A timeline for his return will be provided in the coming days. pic.twitter.com/mzE0kDP2G2

The Warriors squad will have to put in a hard shift against the Raptors to break their losing streak. The Raptors will be equally determined to come out with a win as the game takes place in their backyard. Here are the injury reports and expected roster for the Warriors-Raptors game tonight.

The Raptors despite their 4-game losing streak will be favored to win tonight against the Golden State. The Raptors put up a stunning finish in their last game. Despite the unfortunate ending to the game, the Raptors did play pretty well. Fred VanVleet erupted for the Raptors against the Brooklyn Nets, if he can emulate that performance, the Raptors will be sure to win.

The Warriors are running out of their depth as they look to start backup players. Poole hitting a slump right after his contract extension with the Warriors has not hit the ground running. Klay and Jordan will be heavily relied on for scoring points for the Warriors. What do you think about the game, and who do you think will win the game? Let us know in the comments section below.