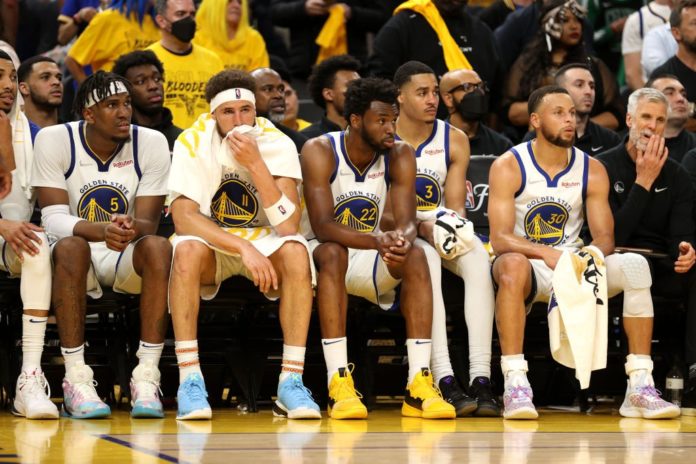 The defending champions Golden State Warriors find themselves in a very tricky situation this season. Apart from being in the 11th position in the Western Conference, the Warriors’ roster appears to be plagued by injuries. Recently, the Warriors revealed that Stephen Curry would likely be sidelined for around a month due to a left shoulder injury, the Dubs superstar suffered during the December 14 encounter against the Indiana Pacers. And now, an injured Curry has been joined by the Dubs’ catalyst for winning the 2022 NBA title, as they find themselves in deeper trouble.

Stephen Curry is likely to be sidelined for a month following a subluxation in his left shoulder. The Warriors announced the news about his partial shoulder dislocation the following day. Stephen Curry will not be a part of the crucial game against 2019 championship rivals Toronto Raptors. In addition, the Warriors are likely to be without their leader for 10-12 games. Now, Golden State recently announced that another star will be unavailable for the upcoming game.

Andrew Wiggins will miss Sunday’s game against the Raptors due to injury. As per reports, “The Warriors announced that Wiggins would miss Sunday’s game vs. Toronto, making it his 7th straight absence.” Andrew Wiggins has been a crucial part of the championship-winning Warriors team last season, averaging 17.2 points. 5.1 rebounds, 2.2 assists, 1.4 steals, and 0.8 blocks per game. His absence in the Warriors’ defense has been missed by the team in the last six games.

Wiggins could have made an impact to hold off the strong Toronto Raptors forwards. However, the 2022 All-Star will sit out on the sidelines alongside Stephen Curry during Sunday’s game.

Golden State faces a massive challenge without Curry and Wiggins

The Golden State Warriors are struggling with their defense and consistency this season. Curry has been the pivotal factor behind the success of the Warriors over the past decade. He is averaging 30 points, 6.6 rebounds, and 6.8 assists per game in 26 appearances this season. Thus, his absence is likely to cause some concerns for the team.

Stephen Curry, who suffered an injury during last night’s game in Indiana, underwent an MRI today.

The MRI confirmed that Stephen experienced a left shoulder subluxation. A timeline for his return will be provided in the coming days. pic.twitter.com/mzE0kDP2G2

Meanwhile, Wiggins is averaging 19.1 points, 5.1 rebounds, and 2.2 assists per game in 22 appearances. Hence, Wiggins’ unavailability during Curry’s absence could hurt the Warriors.

However, the Warriors have stars like Klay Thompson, Draymond Green, and Jordan Poole among others, who could drive the team toward a victory against the Toronto Raptors on Sunday.