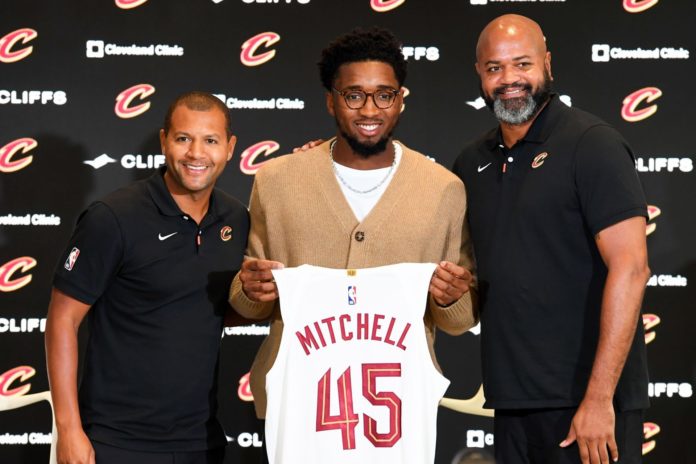 The Cleveland Cavaliers had an interesting offseason that could improve their chances of making a deep run in the playoffs. Ric Bucher believes their offseason acquisitions might not do much for them, and that the Toronto Raptors might do better.

The Cavs were one of the most exciting and surprising teams last season. They had a good run throughout the season but failed to make the playoffs.

During the offseason, the Cleveland Cavaliers shocked the NBA after they signed Donovan Mitchell. With his addition, many believe the Cavs could make the playoffs this year.

But Bucher thinks otherwise. He thinks the Raptors have a better shot at improving on their last year’s win-loss total. On the “On The Ball” podcast, he said:

“I’m not forecasting doom for the Cleveland Cavaliers. Just wondering how much of an impact Donovan is actually going to make. Now I don’t know if the Raptors have enough talent to go deep into the playoffs. But I do know they have the talent, coaching, and mindset to be a nightly pain in the a** to play during the regular season.”

“And they are controversy and distraction-free. Everything points to the Raptors being a solid sleeper pick this season to at least match last year’s win total if not add a few.”

The Cleveland Cavaliers have endured a rough four years since LeBron James‘ departure in 2018. The four-time NBA champ led them to four consecutive NBA Finals appearances before joining the LA Lakers in 2018.

Since then, the Cavs have struggled to qualify for the postseason. They finished ninth in the Eastern Conference standings last year. Unfortunately, they lost their chance to feature in the playoffs after losing to the Brooklyn Nets and Atlanta Hawks in the play-in tournament.

Although the Cavs have put together a decent squad, it might not be enough to get them into the playoffs next year. The competition in the East is fierce, with several teams making improvements to their roster in the offseason.

Nonetheless, Mitchell is a great addition and can help the team move to the next level. During his time with the Utah Jazz, he has featured in the playoffs every year but has never gone past the conference semifinals.

The Cavs open their campaign against the Raptors on October 19 in Toronto. Their first eight games are against Eastern Conference teams, including two games against 2022 finalists, the Boston Celtics.

Will Markelle Fultz Be One of the NBA’s Top Passing Point Guards in 2022-23?

Draymond Green says Ja Morant reminds him of himself, and his reasoning makes a...