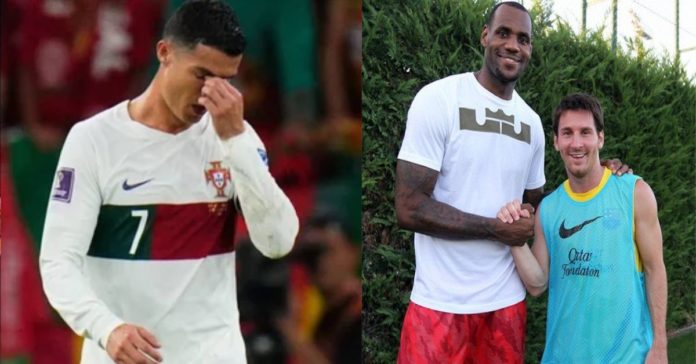 Cristiano Ronaldo fans aren’t too happy with LeBron James‘ latest tweet. Fans must certainly be aware of the ongoing debate in the Football world concerning who the GOAT is. Lionel Messi and Cristiano Ronaldo have been at the forefront of this discussion for years now.

It would appear that the 4x NBA champion shared his take on the situation. He sent out a tweet after Lionel Messi and Argentina managed to defeat Kylian Mbappe and France in order to win the FIFA world cup 2022. Fans must certainly be interested in hearing the King’s perspective on who the Football GOAT is. Additionally, understanding why Ronaldo fans are upset also requires more context.

The Los Angeles Lakers star is currently facing his own struggles, carrying his team through the NBA season. Nonetheless, he found the time to send out a Tweet after Argentina defeated France to win the World Cup. Considering how popular and renowned LeBron is, the tweet and opinion gained quite a lot of traction on the internet.

LeBron’s tweet in itself was quite straightforward. He typed out Messi, followed by a saluting emoticon, a, goat emoticon, and two clapping emoticons. We all know that the GOAT emoji is always used to refer to the greatest player in a given sport. Therefore, fans instantly assumed that LeBron was calling Lionel Messi the GOAT after presumably watching this game.

Keeping aside the LeLiar memes that soon followed, there was a significant amount of disapproval for this tweet. Primarily by fans of Cristiano Ronaldo, who still claim that he is the greatest football player ever despite being eliminated by Morocco in the FIFA world cup. They even offered explanations and theories as to why CR7 remains the football GOAT.

” i knew messi was gonna win in penalty kick, idk what made me say that but my friends were there when i said it”

This changes nothing. He is the GOAT and will forever be. Hero of me and many of us. #Cristiano

Coming clutch when you team needs you the most ? Kylian Mbappé learnt from the best, the Goat, Cristiano Ronaldo. pic.twitter.com/XdNnOIDR4Z

Cristiano Ronaldo was never the Media Goat, he always had the streets tho, and he’ll always have that. A boy from Madeira, who struggled for dinner every night, became a billionaire. A player who had the entire system Rigged against him, became the Goat. That’s his legacy. pic.twitter.com/hSNbHZhwkt

Some even claimed that this was an attempt by LeBron to recruit Lionel Messi to play for the Lakers. Others chose to call out his credibility on this issue. Other football and basketball GOATS’ names were also thrown into the mix.

In any case, we now know LeBron’s present and opinion of the GOAT in football. He and Messi have known each other for many years now. Therefore, it is also possible that his personal feelings played a role in his decision to send out this tweet.

Jimmy Butler Will Be Sidelined Against Detroit – NBA News