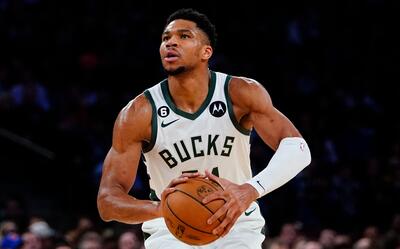 Because it’s much simpler to predict than baseball or football, basketball daily fantasy would get plenty of votes as the best sport to play on FanDuel. Players usually stick to the same minutes and produce at roughly the same rate. Sounds easy, right?

Well, as a result, NBA daily fantasy is extremely reliant on a player’s opportunity, so you’ll need to make sure that you’re up-to-date with key injuries. Our projections update up until tip-off to reflect current news, we have player news updates, and the FanDuel Scout app will send push notifications for pressing updates regarding your players.

With so much changing so quickly, we’re here with plenty of tools to help you out. We have daily projections, a matchup heat map, a lineup optimizer, and a bunch of other great resources to help give you an edge.

We’ll also be coming at you with this primer every day, breaking down a few of the day’s top plays at each position.

With Giannis Antetokounmpo ($11,300) probable, we have to take notice. The Milwaukee Bucks are hosting the Indiana Pacers, a team that tends to play at a fast tempo and that doesn’t have an elite defense (11th in defensive rating). Jrue Holiday is probable, as well, but Khris Middleton remains out. In games against mid-tier defenses, Antetokounmpo is averaging 1.64 FanDuel points per minute. His projection of 58.4 FanDuel points is unmatched on the slate tonight, so he’s the key building block. Nobody else has a projection in the 50s.

Bennedict Mathurin ($5,600) stacks with Giannis in that game while Tyrese Haliburton is out. Mathurin, without Haliburton on the floor, has a 30.1% usage rate and averages 0.94 FanDuel points per minute, via CourtIQ.

Trey Murphy III ($5,100) will also continue to be boosted while the New Orleans Pelicans are without Brandon Ingram and Zion Williamson. With those two off the floor, Murphy is averaging just 0.75 FanDuel points per minute on a 15.4% usage rate. However, in his 30 starts, he is averaging 29.8 minutes and 23.8 FanDuel points. The matchup is tough, but that’s all accounted for in the salary. He’s projected for 33.3 minutes and 26.3 FanDuel points.

There’s a big potential role awaiting Kyle Anderson ($6,200), as the Minnesota Timberwolves list both Anthony Edwards ($8,400) and Rudy Gobert as questionable; of course, Karl-Anthony Towns remains out. In games against teams in the bottom 10 in defensive rating (which the Utah Jazz are), Anderson maintains 1.03 FanDuel points per minute. If Edwards gets the nod, he’ll also be a great play with forward eligibility.

If Lauri Markkanen ($8,300) suits up (he’s questionable), then he stacks with Anderson and/or Edwards in a fantasy-friendly game with a 234.5-point total.

What do we do with Stephen Curry ($9,200)? He and the Golden State Warriors played yesterday in Chicago (a 132-118 loss to the Chicago Bulls). Now, they are in Washington DC to play the Washington Wizards. That’s a pretty tight turnaround, especially when their big four all played at least 29 minutes. Curry himself played 34.5 minutes and racked up a 20-point, 10-rebound, 4-assist double-double for 33.0 FanDuel points. They are listing Klay Thompson out on the back-to-back, which isn’t a surprise, though. Without Thompson on the floor, Curry holds a 34.9% usage rate and averages 1.37 FanDuel points per minute. He projects quite well and should be a big priority in lineups without Antetokounmpo.

Let’s go back to that Timberwolves/Jazz game and situation. D’Angelo Russell ($6,500) stands to be a big value option tonight with the Timberwolves (potentially) thinned out. Anthony Edwards hasn’t missed a game yet this season, but with him off the floor, Russell has a 24.3% usage rate with a per-minute average of 0.93 FanDuel points. He should have the ball in his hands plenty in this juicy matchup. Even with Edwards active, Russell is more than viable at the salary.

Can we go back to Gabe Vincent ($5,000) as a value option? The projections suggest we can. Vincent and the Miami Heat host the Atlanta Hawks and are without Kyle Lowry. Without Lowry on the floor, Vincent holds an 18.0% usage rate. He’s not the most prolific per-minute producer overall. However, in his four starts, he’s averaging 37.8 minutes and 0.87 FanDuel points per minute.

Back up the salary list and in that same game, we can look to Dejounte Murray ($8,200). Murray always plays heavy minutes and has averaged 36.5 minutes and 18.1 shot attempts per game this season. Even against top-10 defenses (which the Heat are), he’s generating 1.05 FanDuel points per minute.

We have a lot of potential options among bigs, so that decreases the opportunity cost in a lot of ways. Plus, we don’t really have true superstars on the slate (no big has a salary greater than $9,900).

If Rudy Gobert ($7,500) suits up, then he rates out well against his former team and should be a priority play when we can get there, but if not, then Kristaps Porzingis ($8,600) could wind up being the core play among high-salaried bigs. Porzingis hosts the Warriors and their unenviable travel situation. This game still has a slate-high 235.0-point total and a 2.5-point spread, so Porzingis/Curry stacks are a lot of fun and easy to justify from a salary standpoint.

Walker Kessler ($5,800) continues to project out well while Kelly Olynyk misses. Kessler will draw another start today, and in his nine starting bids this season, he has averaged 29.9 FanDuel points in only 26.7 minutes per game.

The Phoenix Suns will be without Devin Booker and Chris Paul. Therefore, they are big underdogs to the Memphis Grizzlies. However, Deandre Ayton ($7,700) should produce. He has a 25.1% usage rate and a per-minute average of 1.31 FanDuel points with those two off the floor. Those are boosts of 0.9 and 0.16, respectively, from his splits with them.

Russell Westbrook ‘no grudges’ from the past with Patrick Beverley, ready to compete as...