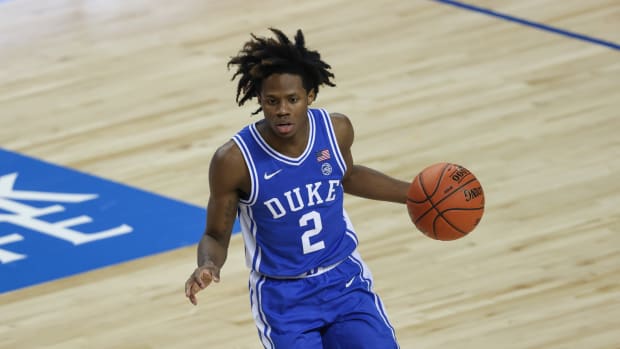 DJ Steward has not yet achieved his dream of playing in the NBA, at least not in the regular season, leading some to wonder what compelled the 2020-21 Duke basketball shooting guard to leave school after only one season. But the undrafted Chicago native is still weeks away from his 21st birthday, so at least time is still on his side.

RELATED: Stacking up all 26 Duke one-and-dones in history

And according to a report from The Sacramento Bee’s Jason Anderson, Steward now has an opportunity to continue his quest to reach the sport’s highest level after signing a contract with the Sacramento Kings on Thursday.

Presumably, though, it’s just a training-camp deal, with no guarantee he’ll see any court outside of the G League.

Furthermore, while the deal should be encouraging to Steward, keep in mind that he was in a similar situation with Sacramento last year.

He appeared in only one preseason game in 2021, scoring two points in a few minutes on the floor. The Kings waived him in October, a week before the start of the regular season. Steward then signed with their G League affiliate, the Stockton Kings, averaging 12.0 points, 2.3 rebounds, and 2.2 assists across the 12 games he played.

In July, Steward saw Summer League action with the Kings for the second year in a row, averaging 7.3 points in his three appearances.

At Duke, the 6-foot-2 undersized two-guard averaged 13.0 points, 3.9 rebounds, and 2.4 assists, albeit for a Blue Devil squad that finished with a disappointing 13-11 record and without an NCAA Tournament invite.

Quinn Cook, a former four-year Duke basketball guard who captained the Blue Devils to a national championship in 2015, agreed to a one-year deal with the Sacramento Kings in August, following his first season without landing on an NBA team since his first year out of college.

However, like DJ Steward, Cook has work to do in attaining a place on Sacramento’s 15-man opening-night roster. With 12 players on guaranteed deals, the Kings have three slots to fill, per Hoops Rumors’ Alex Kirschenbaum, yet a long list of hopeful prospects on contract for training camp.

Considering Cook and Steward are similarly sized backcourt weapons, it’s likely that only one, at most, will be on the roster.

Boston Celtics have no solution for Stephen Curry

An Overview Of The Basketball World Cup: What To Expect