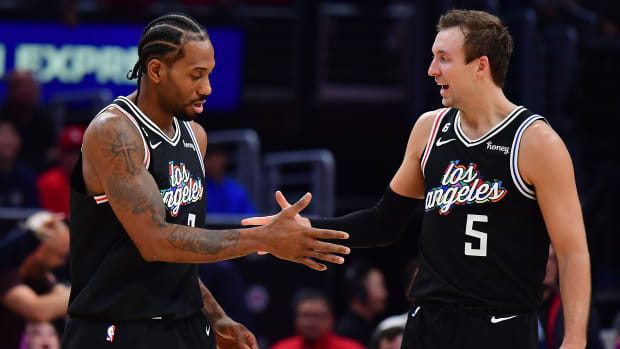 Last season, former two-year Duke basketball lefty guard Luke Kennard led the NBA with his 44.9 shooting percentage beyond the arc. And this season, the 2017 late lottery pick, now a sixth-year pro in his third campaign with the Los Angeles Clippers, looks well on his way to repeating as the top 3-point marksman.

RELATED: List of every Blue Devil currently in the NBA

The Wizards’ NBA Blue Devil, center Vernon Carey Jr., was on the bench but did not enter the contest; he’s played in only three games this season.

Between Luke Kennard’s past four appearances — he sat out the Clippers’ home loss to the Phoenix Suns on Thursday night due to right calf soreness — the 26-year-old has shot 13-for-25 from deep. Los Angeles won all four of those games.

Perhaps during All-Star Weekend in February, the 6-foot-5 Duke basketball product will get a shot to build on last season’s runner-up performance in the NBA 3-Point Contest.

“Cool Hand Luke” is averaging 9.1 points, 2.7 rebounds, and 1.0 assists for the Clippers (18-14), who sit at No. 7 in the Western Conference standings. They now have three days off before hosting the Eastern Conference cellar-dwelling Charlotte Hornets (7-22) at 10:30 p.m. ET Wednesday.

“He Gets Away with Too Much”: Kawhi Leonard Fans Expect Bad News as Things...