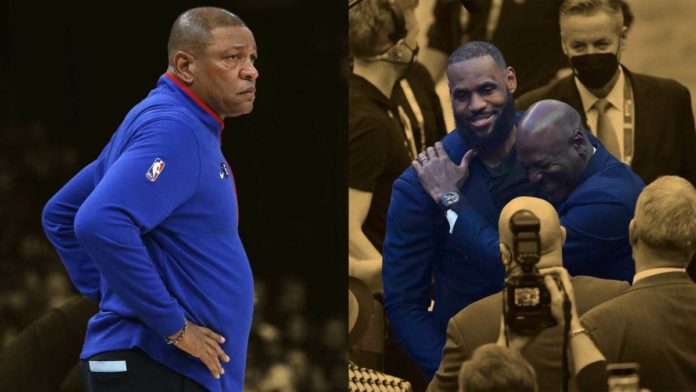 Before their matchup with the Los Angeles Lakers, Philadelphia 76ers coach Doc Rivers declared Michael Jordan as the greatest player ever but stated LeBron James will retire with the best career in NBA history.

Still at the peak of his powers

Sixers head coach witnessed first-hand the greatness of James last night, as the Lakers’ superstar put together another vintage performance in his 20th season, posting 35 points, eight rebounds, and ten assists in 35 minutes against the Sixers.

LeBron’s efforts were in vain, however, as the 76ers, led by big man Joel Embiid rolled into Crypto.com Arena and secured a 113-112 victory to extend the Lakers’ losing streak to three games.

With his 35 points, James became just the 2nd player in NBA history to notch 38,000 points, inching ever closer to the all-time scoring record currently held by Kareem Abdul-Jabbar.

At his current scoring average, the four-time MVP will break the long-standing record shortly after the All-Star break, in what will be a momentous moment in league history.

He has a point

River’s comments add fuel to the never-ending debate between the two NBA icons, and although it may be slightly confusing on the surface, there is an underlying truth to his words.

Jordan outdoes James in total career championships, but LeBron’s longevity, consistency, and record-breaking run will leave little doubt on who put together the most impressive career when it’s all said and done.

Already the out-and-out leader in All-Star, All-NBA, playoff scoring, and soon-to-be regular season scoring, as well as collecting an array of records that is likely to stand the test of time, James’ overall career is already unmatched in the history of the league.

Giannis Antetokounmpo: “A lot of people think my game is boring”

Could Los Angeles Lakers Trade LeBron James In The Offseason

“I was the best”: Giannis Antetokounmpo Translated His Salesmanship While Hawking in Greece to...