The Mike Brown-led Sacramento Kings are off to a 3-6 start to the new season, mainly because of their play in late situational moments of a game. Their last three games have all been decided by three points, with two being losses against the Miami Heat and Golden State Warriors, two teams that played in their respective Conference Finals last season.

A win against teams like that can build a spark to the locker, but being on the losing end creates questioning on where the Kings need to improve their roster.

The Kings find ways to look solid for four quarters by relying on the two-way prowess of former all-star Domantas Sabonis and the point guard wizardry of De’Aaron Fox. He currently averages 16.3 points, 11.1 rebounds (8th best in the League), and 6.1 assists per game. In the three games played in November, the center has averaged 36 minutes a game which is the most amongst others in his position.

In this case, the Kings’ frontcourt depth isn’t as solid as Brown would have hoped to start the season. However, their 2010 fifth overall pick DeMarcus Cousins believes he has the intangibles at 32-years-old to push the Kings out of their 16-year playoff drought in a recent Twitter reply.

In his seven years with the Kings from 2010-2017, Cousins averaged 21.1 points per game. His last two seasons with the franchise were one of the most dominant showings of a big in the modern era, as he averaged over 25 points a game to pair with a double-double in rebounds. Not to mention, Cousins also recorded a 56-point outing, the third most among active NBA centers.

Boogie hasn’t been the same since tearing his quad and ACLbut is still capable of turning back the clock to his All-Star level of play. In his current form, Boogie is a reliable force down low; he can spread the floor as an occasional floor spacer and rebound at a fearsome pace off the bench.

Cousins has become a journeyman in the latter stages of his career due to the injuries above. However, being a significant contributor on a playoff squad could help him become a franchise legend and help him land a job on another team if he so chooses. 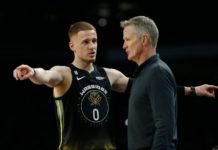 Steve Kerr on Donte DiVincenzo: “He has kinda taken on Gary’s role”

Charles Barkley: “Look what happened last time they got to vote for President”

“You don’t even have them as a title contender?… Oh, you’re going to regret...

“The girls came. They was free and abundant” – John Salley shares the best...