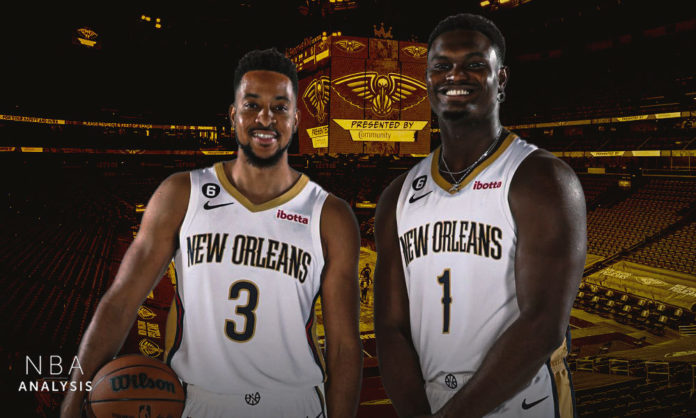 There have been plenty of surprises in the NBA thus far this season, with one of the biggest being the performance of the New Orleans Pelicans. The Pelicans ended the 2021-22 season on a high note, sneaking into the NBA Play-In Tournament and defeating the San Antonio Spurs and LA Clippers to earn the 8th seed in the Western Conference.

That led to a matchup with the Phoenix Suns, whom many people assumed would steamroll the Pelicans. But New Orleans gave them everything they could handle in a six-game series. That stretch was even more impressive because they did it without Zion Williamson.

Williamson missed the entire 2021-22 campaign as he recovered from an offseason procedure on his foot. He looked close to returning on a few occasions but was ultimately held out. His return to the court has helped the Pelicans take that next step, as they have cemented themselves as one of the premier teams in the league.

While Williamson was recovering, the front office made some moves to improve the roster. CJ McCollum was acquired in a big trade ahead of the deadline and helped New Orleans on their playoff push last season. This is the first time that he has really seen Williamson, and he is in awe of what the No. 1 overall pick from the 2019 NBA Draft is capable of. It was shared as McCollum’s diary on Andscape via Marc J. Spears.

“You guys are starting to see what you thought you would see with Zion Williamson. I hadn’t seen him up close and personal before I came here. I had this idea what I thought it was like, then I played with him. I don’t think we’ll ever see anything like it. The way he plays, the efficiency, strength, the power. The finesse to handle and touch around the basket. He had a stretch of nine games around 30 [points], basically. Something ridiculous like that where you’re starting to see the comfort level.”

There are a lot of new faces on the team from the last time Williamson took the court, so an adjustment period was certainly going to be needed. You wouldn’t know that he went more than 17 months between regular-season appearances as he has seamlessly fit into the lineup for the Pelicans this season.

“The funny part is, he didn’t play for a year, so he was figuring things out. Feeling out the game. Feeling out his new teammates, new staff, offense. Getting comfortable jumping and landing again in traffic. Getting back into basketball conditioning. Now he’s finally getting comfortable and settled in to where he’s in his rhythm. He’s finding his spots, shooting 3s when he wants to. He’s getting to the free throw line.”

Williamson is averaging 25.2 points, 7.2 rebounds, 4.7 assists, 1.2 steals and 0.6 blocks in 33.4 minutes per game. He is showcasing the improvements in his game, as he can make an impact in more ways than just rim-rattling dunks.

As McCollum pointed out, he is getting comfortable expanding his game beyond just using his other-worldly athleticism and is doing it all while still getting back into basketball shape. We have seen players take more than a year to get comfortable again on the court after a lengthy absence, but Williamson has picked up right where he left off and is really impressive to McCollum.

“Obviously, you see the highlight plays on offense. But the defense, he’s going to take it personal. He’s guarding. He had a shot block in the corner that was eerily reminiscent of the block he had when he was at Duke. You’re starting to see Zion Williamson unleashed. I’m not going to say it’s his best form because he’s 22, he’s going to get better. But this is him maximizing his potential, his skillset and utilizing everything.”

Williamson is already an All-Star caliber player, stuffing the stat sheet on a nightly basis. With his improvements in other areas, he is taking his game to another level. It will not only result in more accolades for himself, but team success will also follow as the Pelicans are one of the most well-rounded teams in the NBA.

Celtics in talks with Nets on possible Kevin Durant trade, per Adrian Wojnarowski