The 2022-23 Toronto Raptors are in the most crucial point of their season right now. With a 19-24 record and the trade deadline approaching in just over three weeks, the Raptors need to string some wins together to save their teams future. Multiple occasions of head coach Nick Nurse losing the locker room have happened this season and now other players around the league are reporting on Raptors players unhappiness within the organization.

Pelicans star CJ McCollum went on a podcast and hinted at players within the Raptors organization being unhappy. His take only confirms the rumors we’ve heard of trades being almost certain in the near future. The Toronto Raptors franchise has declined quickly since there championship in 2019.

NBA betting sites have the Raptors at (+7500) to win the Finals this season.

CJ McCollum know players within the Raptors franchise are not happy

Nobody came into the season and said that the Raptors were going to win the Finals this season, because that just wouldn’t be realistic. However, Toronto did come into the season with an optimistic view and due to injuries and poor performances, they find themselves in a difficult spot. Do they try and keep their core from the 2019 championship team in tact, or do they decide to pull the plug and make some big time trades for their future?

NBA veteran CJ McCollum was recently on a podcast and gave his insights as to what might be going down within the Raptors franchise.

“I think in terms of what they (Raptors) need or what they are lacking, something is going to happen.”… “I don’t know what. There’s rumblings about certain players on the team not being happy and due to tampering I can’t speak to that. But I think they’re going to move someone.” – CJ McCollum

There’s no question whatsoever that McCollum absolutely knows who the the player or players that are unhappy with their current situation in Toronto. With the deadline quickly approaching, it will be interesting to see what moves the Raptors do end up making. 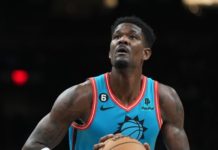 Jayson Tatum: “I feel like I’m the best player when I step on the...