CCI STAT OF THE GAME: The Kings scored 23 points off 16 Bulls turnovers.

CCI RECAP: The Bulls return to Chicago after going 2-4 on their longest road trip of the season. After trailing by as many as 18 points the Bulls crawled back and trailed by only three points with seven minutes left, only to see Sacramento go on an 8-1 run, improving to 13-9 on the season, sending the Bulls to their 14th loss in 23 games.

Domantas Sabonis had a triple- double performance of 11 points, 17 rebounds and 10 assists. It was the Kings first triple-double game since the 2018-19 season. The Kings are off to their best 22 game start since 2004.

DeMar DeRozan added 18 points for the Bulls. He averaged 25-5-5 on the road trip.

The Kings out rebounded the Bulls 46-39 and registered seven double figure scorers .

NEXT: Home with Washington Wednesday. 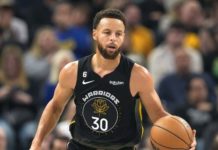 Stephen Curry has recorded the most 30+ point, 10+ assist games in Warriors history

NBA Analyst Stephen A. Smith Reveals His Current Top 5 Players In The NBA:...