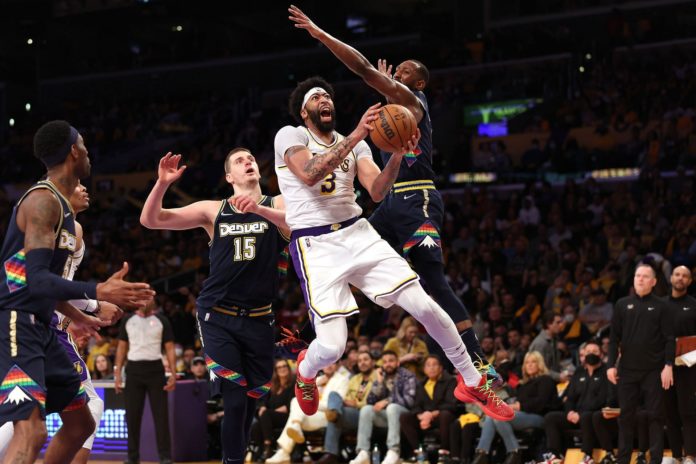 LA Lakers superstar Anthony Davis has earned a reputation as an injury-prone star, having played only 76 games in the last two seasons. However, ESPN analyst Ramona Shelbourne shared some statistics that provide a different perspective. On NBA Today, Shelbourne compared Davis to some other injury-prone superstars.

“I know that Anthony Davis has this reputation of not being available,” Shelborune said. “Charles Barkley calls him ‘Street Clothes.’ He’s played in more games, in those years – since 2019, than either Kawhi Leonard or Paul George. Anthony Davis played a 138, Kawhi played a 102 and Paul George played 133.”

“Anthony Davis, as unavailable as he has been, has played in more games than either Kawhi or Paul George.”

Davis is widely regarded as one of the best players in the league. He has shown the ability to dominate on the offensive end of the floor and displayed his defensive prowess. Davis’s presence is a key element to the LA Lakers’ success.

However, like Davis, Paul George and Kawhi Leonard have also suffered recurring injuries. These players are also considered superstars but don’t receive as much media criticism.

With all three returning to action this season, the Lakers and the Clippers hope to see their stars healthy for the Battle of LA.

Anthony Davis is the key to the LA Lakers’ success

Davis is undoubtedly an essential component of the LA Lakers roster. Coming off consecutive letdowns in the playoffs and the regular season, Davis will need to return to form for the Lakers to return to the postseason. As one of the best players in the game, the Lakers will depend on him this season. Davis has averaged 24.1 points, 9.1 rebounds and 3.1 assists with the Lakers.

Davis has been believed to be the heir to the throne for the last two seasons. This season offers an opportunity for the 29-year-old to take the torch from LeBron James.

“It’s his turn to carry the torch. Bron done carried this muthaf—— for a whole decade… AD came to the Lakers to be a MVP and take the torch from bro and carry it.”

Kevin Garnett on Anthony Davis: “It’s his turn to carry the torch. Bron done carried this muthaf—— for a whole decade… AD came to the Lakers to be a MVP and take the torch from bro and carry it.” (via KG certified) https://t.co/VGnuDcbB3i

Given the state of the current roster, Davis may not see much time at center outside of the closing minutes. While this could hurt the Lakers offensively, it does protect him from further injuries.

The Lakers recently acquired Patrick Beverley and Dennis Schroder. These guards should improve the Lakers’ backcourt play. However, even with these additions and Davis’ health, LA must figure out Westbrook’s role to compete in the West.

Anthony Davis vs the Nuggets:

After this series, Nikola Jokic called AD the best scorer in the NBA

That guy will be back

Draymond Green on not thinking about Lakers

Lorenzo Brown: “The outside noise doesn’t bother me at all”