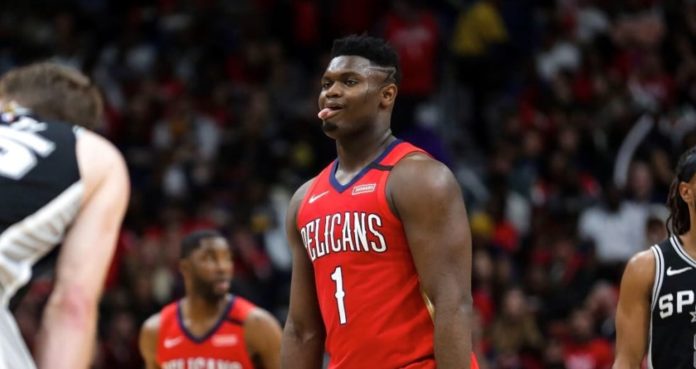 C.J. McCollum has a bold warning for the NBA with Zion Williamson continuing to soar and seize his max potential.

In an interview with Marc J. Spears of Andscape, McCollum made it known that Williamson is starting to figure out his capabilities, with the star big man being a fearsome side of the league once he attains full circle of his development

“You’re starting to see Zion unleashed. I’m not going to say it’s his best form because he’s 22, he’s going to get better. But this is him maximizing his potential, his skillset and utilizing everything,” McCollum said.

After being swarmed by past injuries and costly sitting out the entirety of the last season due to foot and weight issues, Williamson is now lethally focused on what he can further achieve as a clear-cut generational talent.

This year with the New Orleans Pelicans, he is averaging 25.2 points, 7.2 boards, 4.7 assists in an overwhelming 64.6 percent true shooting rate in 25 games played. These numbers can only improve with him blazing to figure out his real identity.

“You guys are starting to see what you thought you would see with Zion,” McCollum continued. “I hadn’t seen him up close and personal before I came here. I had this idea what I thought it was like, then I played with him. I don’t think we’ll ever see anything like it. The way he plays, the efficiency, strength, the power. The finesse to handle and touch around the basket. He had a stretch of nine games around 30 [points], basically. Something ridiculous like that where you’re starting to see the comfort level.

“The funny part is, he didn’t play for a year, so he was figuring things out. Feeling out the game. Feeling out his new teammates, new staff, offense. Getting comfortable jumping and landing again in traffic. Getting back into basketball conditioning. Now he’s finally getting comfortable and settled in to where he’s in his rhythm.”

With the Pels establishing themselves as a legitimate title power as they presently sit third in the West with a 19-12 card, their hopes of a title in the future can only be clear and attainable with Williamson transforming into his healthy and monstrous state.

Jaren Jackson Jr. to make season debut for Memphis on Tuesday against NOLA

REPORT: Clippers Are Interested in Trading For Myles Turner

“He’s Been Doing This but They Never Cared”: NBA Fans Erupt as Kyrie Irving...