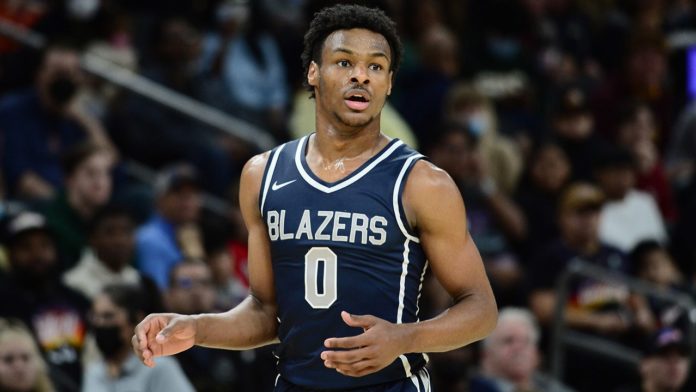 Bronny James, the son of Los Angeles Lakers superstar LeBron James, had a highlight reel dunk during a game overseas with his amateur California Basketball Club squad on Monday.

James and the California Basketball Club played the U18 French Select team in Paris. The young son of one of the best basketball players in the world even made his father say “whoa” in the second quarter when he took the basketball coast-to-coast and finished with a supreme dunk on a defender.

LeBron James and Donovan Mitchell were among those who reacted to the dunk.

Bronny James would finish with 25 points in the game, but it wasn’t enough to guide the team to a victory. The California Basketball Club lost 97-85. The team will wrap up its European Tour against an Italian club on Thursday.

GIANNIS ANTETOKOUNMPO OPENS THE DOOR ON SWITCHING TEAMS ‘DOWN THE LINE’

James is among the top high school basketball players in the country. He’s set to play his senior year at Sierra Canyon in California.

He has yet to commit to a college for the next stage of career leaving speculation as to what’s next for the future NBA player. According to 247 Sports, Duke, Kansas, Kentucky and North Carolina have all expressed interest in him but has yet to receive any offers.

James taking the route of playing overseas instead of going to college is reportedly on the table as well. According to The Athletic, Australia’s National Basketball League could be a landing spot. LaMelo Ball took that route and was later a top three pick of the NBA Draft.

Ryan Gaydos is the sports editor for Fox News and Fox Business. Story tips can be sent to [email protected]

De’Aaron Fox On the Kings Trading Tyrese Haliburton: ‘They Believe in Me’

$800 Million Worth The Rock Earns Only About 2% of Stephen Curry’s Value in...