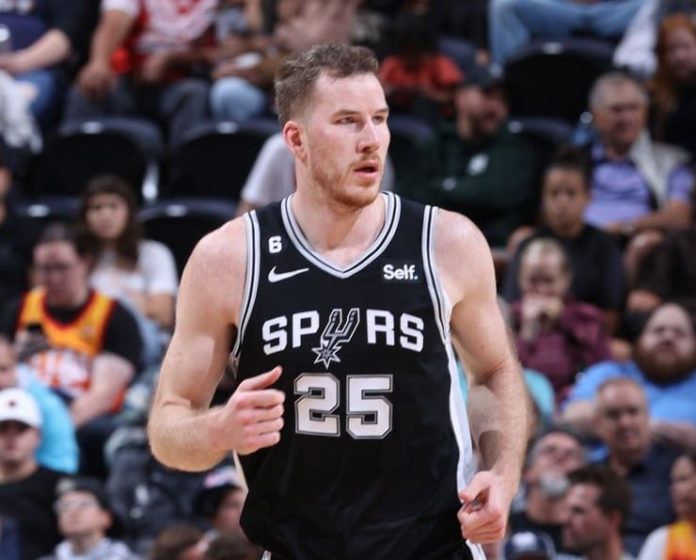 The Boston Celtics have the best record in the NBA and the Eastern Conference right now at 12-3. Boston has won eight games in a row and they’ve looked just as dominant as they were last season. Even with their dominance, they’ve lacked at the center position this season and could look to add some depth. One San Antonio Spurs player has been linked in trade rumors with Boston.

Spurs center Jakob Poeltl has been with the team since the 2019-20 season and has played in 66 or more games for them in each of those seasons. Recently, NBA insiders at ESPN hinted at a potential connection between Poeltl and the Boston Celtics.

NBA betting sites have the Celtics at (+550) to win the Finals this season.

“The name that has come up that people have speculated has been Jakob Poeltl from the Spurs.”

NBA EPSN insider Brian Windhorst went on a basketball podcast and gave hints that the Celtics may be linked with Spurs center Jakob Poeltl.

“The question is ‘does this team need to go out and get another big man who can defend?”… “The name that has come up that people have speculated has been Jakob Poeltl from the Spurs. They did a deal with the Spurs last year, obviously, for Derrick White.” – Brian Windhosrt

“The Spurs may want to keep Jakob Poeltl. I’m not saying they’re going to put him out there. The Spurs were unable to extend Poeltl. They tried to extnd him before the season. He will become an unrestricted free agent.” – Brian Windhosrt

Poeltl is having a career-high season so far in rebounds (10.1) and assists (3.7) per game. It’s the first time in his career that he’s averaging a double-double and the Spurs have been relying on him more this season with Dejounte Murray on the Hawks this year. The only other center in the league that’s averaging more assists per game than Poeltl is Nikola Jokikc, a two-time league MVP. There’s no doubt that the Spurs value Poeltl highly, but Boston may want to add depth and make their team stronger after falling short in the NBA Finals last season.