Over the years, NBA and soccer fans have developed a very close connection with each other. There are quite a few soccer players who love watching the NBA. On the other hand, many professional NBA players would also become half-decent soccer players with the soccer skills that they currently possess.

Just a few days ago, Pascal Siakam showed off his elegant soccer skills just before an NBA game. The NBA star then put in a match-winning performance as his ‘cherry on the cake’ moment.

Siakam was proudly showing off his soccer skills to the fans without any hesitation. Soccer fans from all over the world appreciated his skills and didn’t shy away from making direct comparisons with the soccer greats. Many soccer fans were stunned looking at the stability that Siakam had while controlling the ball.

Let’s have a look at how the fans reacted after watching Siakam’s soccer skills.

he is a son of Africa. He was born with a football in his hands.

Quite a few soccer fans were lost for words. They didn’t quite know how to react to the same. A few soccer fans poked fun by comparing Siakam to the likes of Cristiano Ronaldo. In 2019, Pascal Siakam revealed that he once dreamt of becoming a soccer player. In fact, the NBA star used to play soccer regularly in boarding school till the age of 11. After returning back home, the NBA star developed a liking for basketball after attending a free summer camp that was just for fun.

Siakam made sure that he ended his day on a high. The NBA star made the headlines after he turned in a performance of a lifetime to help his team win and gain momentum for the rest of the tournament.

Pascal Siakam with a match-winning performance!

The Toronto Raptors were not having the best run of form prior to this game. The Raptors had shockingly lost all three of their last games in a row. The NBA fans weren’t quite expecting anything special from the Raptors. However, Pascal Siakam was in a different zone altogether. The powerful center scored a total of 27 points. Scottie Barnes finished behind Siakam with nine rebounds and 22 points.

Siakam was successful in getting his team out of a losing rut. However, the Raptors have not been consistent this season. They have been plagued with lapses of concentration that culminate in them losing the match.

However, Trail Blazers’ Damian Lillard did all he could to try and claw his way into the game. The American basketball pro scored a total of 34 points all by himself. However, the Trail Blazers still fell short by a 12-point gap. The final score after the game was Raptors 117 – 105 Trail Blazers.

Watch This Story: Despite Being Only 5% as Rich as Michael Jordan Lionel Messi Once Spent More Money on a Car Than Mj Ever Earned in a Single Active NBA Season

In your opinion, which current soccer player can become a decent NBA player if they were given the choice to switch careers? 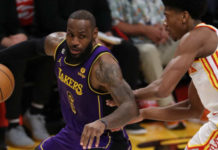 Trending Topics: Will John Wall or Patrick Beverley have a bigger impact in L.A.?