UNCASVILLE, Conn. – Nine members of the Naismith Memorial Basketball Hall of Fame’s Class of 2022 participated in a news conference Friday afternoon at the Mohegan Sun resort and casino, signaling the start of enshrinement weekend.

Seven others weren’t able to make it. Their Hall of Fame honor is arriving posthumously.

That includes Hugh Evans, the longtime NBA game official and the first Black referee among the Hall’s 17 (just seven who worked primarily in the NBA). Evans, in poor health, was accompanied by fellow ref Bob Delaney to the NCAA men’s basketball Final Four in New Orleans last spring to hear his acceptance into the Hall announced.

That had to serve as his highlight, though, because Evans died in July.

“That’s one of the things over the years that’s kind of heartbreaking,” said Naismith chairman Jerry Colangelo, “when some of the people who are being inducted are feeble or can hardly get up to the stage. And some don’t make it.

“Hugh Evans, we saw him in New Orleans and that was it. We found out later he was gone.”

Hugh Evans was an NBA referee for 28 years. Known for his calm and commanding demeanor, Evans officiated in 35 NBA Finals games as well as almost 2,000 regular-season contests.

Among the inductees this weekend, with the official ceremony Saturday night at Symphony Hall in Springfield, Massachusetts, longtime coach, instructor and author Del Harris will enter in the Contributor category. Harris, 85, took the stage Friday afternoon a little wobble, fresh from a back operation days earlier.

At the Class of 2021 enshrinement a year ago, legendary Boston Celtics great Bill Russell was inducted as a coach 46 years after he went into the Hall as a player. Russell, 87 at the time, was in decline and wary of the novel coronavirus, pre-recording his acceptance speech on video. But he still traveled cross-country to attend the event.

Said Colangelo: “Getting him back last year was a big challenge because of his health and the distance he had to come. We were so happy that he could make it and experience what he did.”

The McLendon Foundation holds a roundtable discussion for their HOF speech.

It’s a challenge for the Hall, Colangelo acknowledged. Making candidates wait until the votes go their way risks honoring them too late. NBA star Tim Hardaway, for example, played his last game in May 2003 but finally got elected this year.

Going back to clean up omissions and broaden the Hall’s context, though, invariably means some new members won’t have survived till enshrinement.

Consider the 1972 U.S. men’s basketball team, now in its 50th year since the controversial ending to the gold medal game in Munich turned them arguably into the second-most famous Olympic hoops squad, behind only the 1992 Dream Team.

That group was among the nominees this year as a team entry but didn’t get the necessary votes. In recent years, players Jim Forbes and Dwight Jones and assistant coach Johnny Bach all have died. The Hall feels as out of reach for now as the gold medals they were denied

“We want [members] to enjoy the moment,” Colangelo said. “This is it, this is the pinnacle.

Colangelo added: “Here’s the thing: We can’t play God. We don’t know when any of them is not going to be here. So you’re really talking about speculating how long someone is going to be around. It’s difficult.

“It’s something we talk about all the time. We want to do a better job whenever we can to make sure it happens sooner rather than later.”

Those who did participate Friday were enjoying their moment, including:

• Karl earned his Hall selection in the NBA coaching six franchises, most successfully in Seattle, Milwaukee and Denver. But he played four-plus seasons for San Antonio, including three while the Spurs participated in the ABA. He remains loyal to that upstart league that merged into the NBA before the 1976-77 season.

“I’ll be honest, I don’t think the ABA gets enough credit for the greatness of their league,” Karl said. “The first year of the merger, I think 10 of the 24 All-Stars were ABA players.”

Coaching legend George Karl honored to be named to the Naismith Basketball Hall of Fame.

Karl was in high school near Pittsburgh when the ABA’s Pittsburgh Pipers, lead by the great Connie Hawkins, won the league’s championship. As a rookie, he became such good friends with his roommate Coby Dietrick that he named his son after him.

The longtime coach also is proud of the many ABA ideas the NBA adopted, from cheerleaders and a dunk contest at the All-Star Game to, of course, the 3-point shot. He’s especially happy with the agreement by the NBA and the players union to make pension payments to some of the surviving ABA players

• Hardaway has multiple claims to fame, from his five All-NBA selections and his namesake son who plays for Dallas to teaming with Chris Mullin and Mitch Richmond as Golden State’s “Run TMC” in the 1990s. But he’s a playground legend for his famous killer crossover move, freezing or topping opponents as he scampered by.

Asked Friday which current NBA player might rank as the best with that move, the former point guard said: “Nobody has the Tim Hardaway crossover. But I’ll tell you this, there are a lot of guys out there who can handle the basketball. Kyrie Irving, Steph Curry of course, Damian Lillard and you’ve still got the old guy out there: Chris Paul.

“There are a lot of guys out there who, if you’re not ready for it, can break your ankles.”

• Harris, whose 556 victories in 14 seasons as head coach only scratched the surface of his contributions as an assistant, an executive and a teacher of the sport, made an important distinction. He said he coached “with” 15 Hall of Famers, stressing collaboration rather than any top-down bossing.

“I didn’t put ‘em there. Most of them were well on their way before I ever got to them,” said Harris, who has worked through six full decades and parts of eight. “I learned from ‘em. That’s why I say ‘with’ them.”

• Manu Ginobili drove home the point of how rare his career was by current standards. “I had 16 years playing for the same coach, with the same point guard and the same power forward,” the four-time NBA champion said of Gregg Popovich, Tony Parker, Tim Duncan and the Spurs. “Other teammates for 5-to-10 years. Same owners, same community, same fans.”

Not surprisingly, Ginobili asked Duncan, a Class of 2020 inductee, to be his official presenter Saturday night. “I owe Timmy big time,” he said. “There’s no Hall of Fame talk if Timmy is not on my team.”

This will be the perfect role for the taciturn Duncan. Presenters, regardless of their star power, simply accompany the Hall of Famer onto the stage and stand silently by during their honoree’s acceptance speech.

Steve Aschburner has written about the NBA since 1980. You can e-mail him here, find his archive here and follow him on Twitter.

The views on this page do not necessarily reflect the views of the NBA, its clubs or Turner Broadcasting. 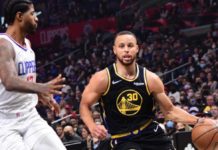 A Former Warriors Rookie Recalls How, During a Timeout, He Forced Stephen Curry to...

Quarter-finals preview, schedule and how to watch NBA stars after shock start to the...

Stephen Curry’s “night, night” trademark: How was the Chef’s iconic celebration cooked up?