19 seconds agoGolden State Warriors small forward Andrew Wiggins (groin) is not slated to suit up for either the team’s contest Tuesday vs. the Knicks or Wednesday against Brooklyn due to a strained right adductor. Wiggins has been down the past seven games due to the ailment, which along with Stephen Curry‘s (shoulder) absence, has left Golden State seeking offensive thump. Jordan Poole (career-high 43 points Sunday) has largely filled that role, while Donte DiVincenzo, Anthony Lamb and Moses Moody have seen increased run as well. When healthy, Wiggins has shot a career-best 51.1 percent from the field this season, while knocking down triples at a 45 percent clip (with an average of three made triples per night). The Warriors sound as if they’ll play it cautious with Wiggins, making Christmas Day the next best chance he has at returning to action.—Jesse Borek
Source: NBA Injury Report 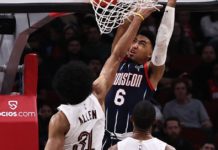 Can the Jazz keep this up? NBA scout weighs in on Utah’s hot start