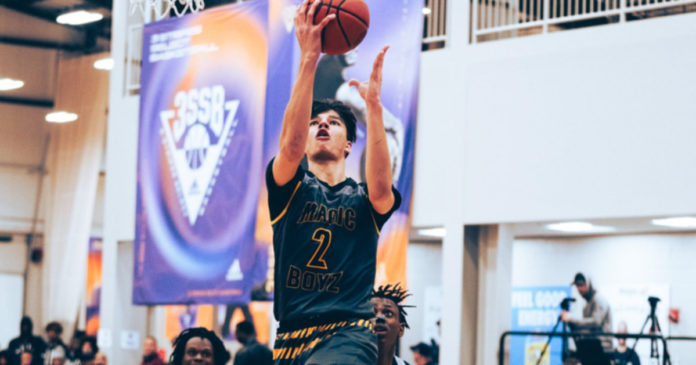 From Michael Jordan’s son Jeff in 2007, to Dwyane Wade’s son Zaire in ’21, the general mentality among the proverbial heir apparents of NBA royalty is centered on sidestepping their fathers’ colossal shadows and organically formulating their own shape of sorts, no matter what that looks like.

And then there’s Andrej Stojaković.

As the son of former NBA star Peja Stojaković, Andrej overstands the “create my own lane” line of thought, just not to the point of forsaking the diagram that’s smack-dab in his face.

“I know some guys just don’t even want to be compared to their dads who played in the league,” Andrej says. “But I’d personally love to have as successful a career in the NBA as my dad did. I want it on my own, yeah, but I’m definitely gonna follow his blueprint to get it done.”

Smart move. Peja averaged 17 points, 4.7 rebounds and 1.8 assists and shot 40.1% from the three-point line in 13 seasons in the NBA. In eight years with the Kings, he was named to three All-Star games, named All-NBA second team and led Sacramento to the 2002 Western Conference finals.

Andrej, 18, was born in Thessaloniki, Greece, where Peja played professionally until he came to play for the Kings in 1998. Unfortunately for the 6’7″ scoring guard, memories of his father’s glory days are spotty at best.

“Man, I don’t remember most of it,” Andrej says with a laugh. “I was so young; I just remember being in the tunnel and the locker room and stuff. I wish I could experience it now because I could embrace it so much more having an understanding of it like I do. But that’s what I mean about making my own way; now I can try and get there to make my own memories.”

Peja says he can foresee an ascension with a logical progression.

“I think it’s natural to believe that players his age do get better,” Peja says. “If he continues to work and develop, along with the maturity aspect, yes, better basketball is ahead of him.”

He had an even more impressive summer with the Compton Magic (Calif.), where he played against the top players around the country in the grueling Adidas 3SSB. Andrej pumped in 20 points and seven rebounds a game for the Magic—not bad for a guy who “only started to take basketball seriously three years ago.”

“Freshman year I played JV basketball, but it was just for fun,” Andrej says. “I wasn’t serious about it at all. Then something clicked in me during my sophomore year; it was fun, and I felt like it was meant to be for me. It took over me. It was something that I wanted every day. My parents never pushed me to play, but when I started getting more serious with it, they were all in to help me.”

Peja has been Andrej’s trainer ever since the mental shift freshman year, which accounts for the striking imprint you see when watching him play. Both are dynamic shooters, who use their size to shoot over the top of smaller guards, their intellect to create spacing and masterfully exploit angles when they’re posting or running off screens.

That said, Andrej isn’t a mirror image of his father on the court, a reality that Peja embraces. To that end, Peja has Andrej break down film of Devin Booker and Luka Dončić to add different elements to his game.

“He wants me to add things to my game that he wasn’t as successful with,” Andrej says of Peja. “It’s just great to have my dad, a guy who’s been to the top, to be able to show me specifics every day about the best way to reach my ultimate goal. It’s such a big advantage for me, so I embrace it.”

When it comes to Andrej’s recruitment process, they are leaning on the fly.

It doesn’t help that he’s wowed during every official visit and the “come in and have a big role from Day One” message is a virtual copy/paste on every call with every school.

Andrej also gets the hard sell from his peers, fielding consistent texts from Stanford commit Kanaan Carlyle and Duke commits Jared McCain and Sean Stewart. UCLA commit Devin Williams wrote about his desire to have Andrej join him in the Bruins’ 2023 class in a blog with Sports Illustrated.

“At the beginning it was super exciting to have all of the big offers, but by the end of the summer I was drained,” Andrej says. “I just always remember that I’m living out my dream, so it’s a great position to be in. It all started with that mental shift.”

The mindset overhaul created the production that subsequently prompted the country’s top college coaches to line up trying to lure him. Peja often reminds Andrej that “it’s a once-in-a-lifetime experience.”

“So, enjoy it,” Peja says. “Ask questions, learn about the coaches and their programs. Lastly, make a decision that you will be happy with.”

He recently took a step forward in that regard, cutting his inordinate list of suitors to six: UCLA, Stanford, Texas, Oregon, Duke and Virginia—all offers he picked up during his breakout spring and summer runs.

Andrej has already taken visits to UCLA and Stanford in June and will visit Texas on Sept. 9 and Oregon on Sept. 16.

“I’m in the process of possibly coming up with a date for Duke and Virginia,” Andrej says. “I’m still trying to decide what school, Virginia or Duke, is expressing interest the most. If the time is right and the connection is strong between us, I’ll take the visits. I just have to see where it feels right. This process is hard; I’ve learned that people read into everything.”

Speculation ran rampant that Andrej’s commitment was imminent because of the Serbian connection between Simović and the Stojaković families. Simović and Peja both hail from Belgrade. The reality is that Andrej met Simović “for the first time” during his visit to Westwood.

“I didn’t even know they had hired him until my visit,” Andrej says. “Never knew him. This is the stuff that people say and believe that’s just not true. I hear all about the rumors that I’m not leaving the West Coast, but I can say 100% that’s not true because I have no idea where I’m even leaning. Even if I end up going to a school that people are predicting, trust me, it will be because I figure that out over the next month or so. Right now, I just don’t know.”

That said, Andrej says he’s taking organically subtle queues that are separating certain schools from the pack as he steadily approaches the 11th hour in his recruitment.

“Some people are calling me twice a week; some people are calling me once a week,” Andrej says. “At this point, I can tell who’s real, but I’m really staying open. My plan is to sign during the early signing period in November, so I’ll decide around mid-October. It will be tough, but I’ve got my dad, I’ve got my family and I’m in a position most kids dream of. It will all work out the way it’s supposed to.”